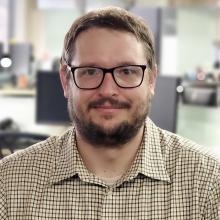 Born and raised in the Intermountain West, Murphy Woodhouse has called southern Arizona home for most of the last decade. He’s one of two field correspondents at KJZZ’s Hermosillo bureau, where his reporting focuses on the trade relationship between Arizona, Sonora and the rest of Mexico.

Before joining the station, Murphy was a reporter at the Arizona Daily Star and the Nogales International. Prior to his reporting career, he completed a master’s degree at the University of Arizona’s Center for Latin American Studies and did three wildfire seasons with the Snake River Hotshots. He’s a proud graduate of the University of Montana’s School of Journalism.

When he’s not reporting, Murphy is often out in the woods running or riding singletrack, or swinging in a hammock with a book.