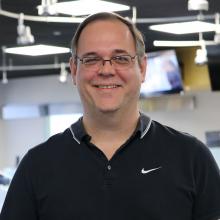 Previous to joining the KJZZ staff in September 2017, Tom lived on the island of Guam in the Western Pacific where he was news director for KPRG, Public Radio Guam and Saipan and also worked as a freelance writer for the Guam Daily Post.

He is the Weekend Edition host, as well as a reporter and producer for KJZZ. He is a second-generation broadcaster with a wide vocational background in media, telecommunications and education.

Tom is a 1996 graduate of Ball State University with a M.A. in English and also hosts KJZZ's "Word," a podcast about literature in Arizona and the region which he created.