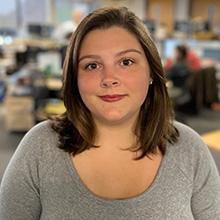 Senior field correspondent Bridget Dowd has a bachelor’s degree from Arizona State University’s Walter Cronkite School of Journalism and Mass Communication. During her time there, she served as the station manager for Blaze Radio, ASU’s student-run radio station. She was also a finalist for a Hearst Journalism Award in the Radio News & Features category.

Dowd first came to KJZZ as an intern in 2017. Later that year, she became a weekend reporter. Dowd went on to produce KJZZ’s Morning Edition from 2019 to 2021. She also spent a year working as a reporter and host for KTOO in Juneau, Alaska.

Dowd grew up all over the West Coast, but came to Arizona for college and couldn’t stay away from the desert. She especially enjoys covering stories about education and answering questions from listeners through KJZZ’s Q&AZ project.