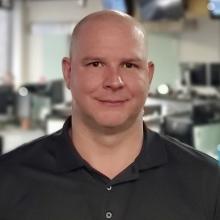 Matthew Casey has won Edward R. Murrow awards for hard news and sports reporting since he joined KJZZ in 2015.

Casey helped open two local bureaus. He covered immigration for the Fronteras Desk during the Trump administration. Casey reported, wrote and produced the podcast "Empty Seats" about the pandemic’s effect on the professional sports industry in metro Phoenix.

Before public radio, he worked for newspapers, digital media and at a television station. “A long time ago, in a galaxy far, far away,” Casey and a buddy rode a bus to Mexico City to cover Andrés Manuel López Obrador’s first presidential bid.

Casey is a proud Spanish speaker and grateful to the immigrants who taught him while working in restaurants. When he’s not reporting for KJZZ, Casey enjoys swimming laps, going to University of Arizona football games and exploring Cochise County.