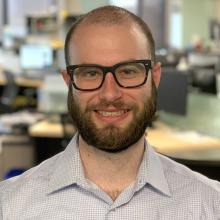 Dillon Rosenblatt is a producer for KJZZ's The Show. He was previously a reporter at Arizona Capitol Times where he covered the governor's office, education, the courts, elections and more. He also has bylines in Phoenix New Times and the Arizona Mirror and urges everyone to support local journalism.

When he's not getting under the skin of politicians and bureaucrats, Rosenblatt can be found frequenting movie theaters, local coffee shops and dive bars. He lives in Phoenix with his dog, Ava, who is his watchdog companion.