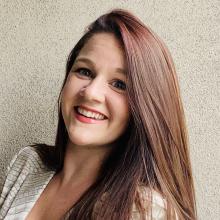 Madison Mulvihill, formerly Cerro, is an assistant digital editor at KJZZ and the Division of Public Service. She also works as a podcast producer for Hear Arizona, KJZZ's podcasting initiative.

She graduated from Arizona State University’s Walter Cronkite School of Journalism and Mass Communication in 2020. At ASU, Mulvihill worked as an audio reporter for Cronkite News–Arizona PBS where she put together flash briefings for smart devices, feature stories and podcasts. On occasion, Mulvihill would also host and produce shows. Many of her audio stories were picked up and aired on several local radio stations, including KJZZ.

Before Mulvihill’s experience as an audio reporter, she worked as an intern for RightThisMinute: The Viral Video Show. Mulvihill’s responsibilities included working with producers to find content for the show — as well as working as part of the web team to write digital stories and promote viral video content.

Mulvihill also worked on the content team at Discount Tire Co., where she wrote overviews for hundreds of store locations and created product descriptions. Mulvihill believes the marketing and content writing skills she gained at Discount Tire are an important addition to her skills in journalism.

In addition, Mulvihill has written many stories for local newspapers — several of which made the front page. She loves all facets of journalism and knows that her experience in different positions has allowed her to become a well-rounded journalist.

She believes in the power and importance of journalism, trying new things and doing all things with kindness.

Mulvihill lives in Scottsdale with her husband, Richard, and her pet snake, Sir Hiss. In her spare time, she loves to put her creativity to work making crafts or working on DIY projects.