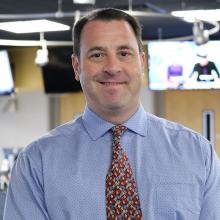 Phil Latzman is an award-winning digital journalist and broadcast professional with over 25 years of experience covering news and sports on a multitude of platforms.

Latzman moved to Arizona in 2015 to be a part of what, he feels, is the best public media operation in the country at KJZZ. Before that. he was a reporter and columnist for the Tribune Company's South Florida Sun-Sentinel.

For a decade, Latzman served as morning news anchor and reporter for Florida's largest NPR station, WLRN. While there, he was part of WLRN's groundbreaking collaboration with the Miami Herald and was host and creator of the station’s weekly public affairs program, The Florida Roundup.

Latzman has interviewed some of the world's most interesting people from political circles to the entertainment world, while hosting a variety of talk shows, ranging from hard news to sports. His work has been honored numerous times by the Florida Associated Press, Society of Professional Journalists for newscasts and for feature reporting on such topics as elections, Cuba and sports. Latzman also served as a Florida network correspondent covering everything from hurricanes to politics for NPR and other national media outlets.

Prior to coming to WLRN, Latzman was sports director for WIOD and WINZ, where he hosted a nightly sports-talk show and anchored coverage of Miami Dolphins, Miami Hurricanes and Miami Heat broadcasts. His was the first voice heard on WQAM when it became South Florida’s first all-sports radio station in 1992.

Latzman is a New York native who spent his formative years in broadcasting at WABC Radio, where he produced, edited and screened various talk shows in addition to New York Yankees baseball broadcasts.