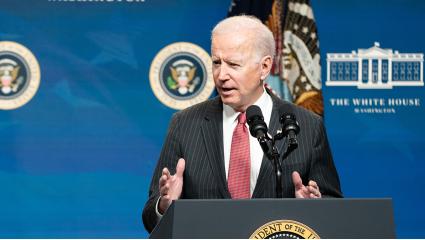 Former President Donald Trump's list of priorities when he took office had immigration and border enforcement at or near the top. But the actual number of executive actions or orders related to immigration by Trump pales in comparison to what President Joe Biden did in his first year in office.

Martin Luther King III and his family hosted an event in support of the John Lewis Freedom to Vote Act in Phoenix on Saturday. A similar event will be held in Washington, D.C., for Martin Luther King Day.
→ Get more Arizona politics news
Jan. 17, 2022

Arizona Treasurer Kimberly Yee announced Saturday that she will drop out of the race for governor and focus on running for reelection for her current position. Yee, a Republican, said in her announcement that there is “more work to be done” as treasurer.
Jan. 16, 2022

Q&AZ: Why does Homeowner Assistance go to utilities?

In early November, the state housing department launched the Homeowner Assistance Fund, meant to help people affected by the pandemic avoid foreclosure. Through KJZZ's Q&AZ project, one listener asked: Why has the fund mostly helped homeowners with utilities and not mortgage payments, so far?
Jan. 17, 2022

Former President Donald Trump stepped up his election-year effort to dominate the Republican Party, holding a rally in Arizona on Saturday in which he castigated anyone who dares to question his lie that the 2020 presidential election was stolen, including the state’s GOP governor, Doug Ducey.
→ More Arizona politics news
Jan. 16, 2022

A hunger strike is once again being used to put pressure on Arizona Sen. Kyrsten Sinema to help pass federal voting protections. Three groups began a hunger strike in front of the Arizona Capitol building on Friday in support of the Freedom to Vote Act.
Jan. 15, 2022

The E-Qual system allows Arizona political candidates to qualify for the ballot by gathering signatures online, instead of having to go door to door. But a problem with the online system may leave some of those candidates out of the 2022 race as the primary deadline approaches.
→ More Arizona politics news
Jan. 15, 2022

A Phoenix man denies being part of a plot to stop a vote by Congress, which led to the transfer of power from former President Trump to Joe Biden.
Jan. 14, 2022

Arizona Gov. Doug Ducey announced Friday that the state is taking new measures to keep students in classrooms, including potentially removing limits on how many days substitute teachers can teach.
Jan. 14, 2022

Buoyed by strong state revenues, Gov. Doug Ducey is proposing a $14.25 billion spending plan for the new fiscal year, about 8.6% more than this year, including tax cuts aimed at the poor to reward them for working.
Jan. 14, 2022

Treasury official sets deadline to get Ducey programs into compliance

The U.S. Treasury Department is threatening to take back more than $170 million in recovery funds or withhold money unless Gov. Doug Ducey's office can address issues it sees with two education programs within 60 days.
Jan. 14, 2022

NewsCap: What Ducey left out of his State of the State

Republican state Rep. Steve Kaiser is introducing a bill that would eliminate sales tax on guns and firearm safety equipment like safes.
Jan. 14, 2022

Dozens of civic organizations are calling on top legislative Republicans at the Arizona Capitol to reinstate options for the public to testify virtually in House and Senate committees.
Jan. 13, 2022

Gov. Doug Ducey’s office said the pandemic has taken a heartbreaking toll as the state surpasses 25,000 total deaths from COVID-19. But the governor’s office did not respond to several questions from KJZZ News about the state’s pandemic response.
Jan. 13, 2022