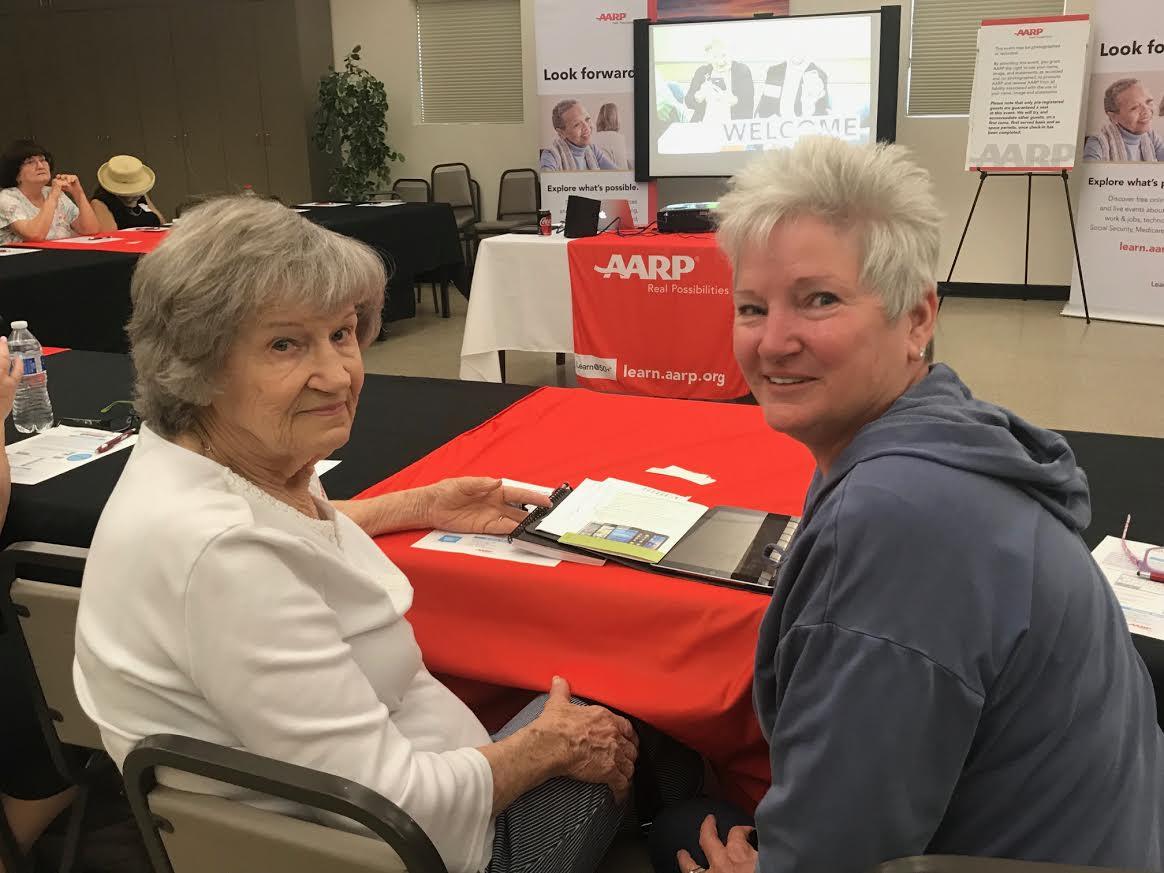 Kathy Ritchie/KJZZ
Sylvia Land and her daughter, Pam Bates, are attending AARP's tech class geared toward beginners. Land wants to learn how to use her iPad.

There are a lot of stereotypes when it comes to older adults, but the one that probably gets the most play is the one about technology. Despite that, many seniors are learning to become more tech-savvy.

It’s a cloudy Tuesday morning at Tempe Senior Center. Tucked in the back is a classroom with desks set up in a U-shape. Volunteers from AARP are handing out tablets to the people ambling in. This is AARP’s Tech Workshop.  This particular class is geared towards beginners, like 86 year old Sylvia Land

"I am illiterate," said Land, who is referring to some of the challenges she faces when it comes to technology. She's here with her 65-year-old daughter, Pamela Bates. 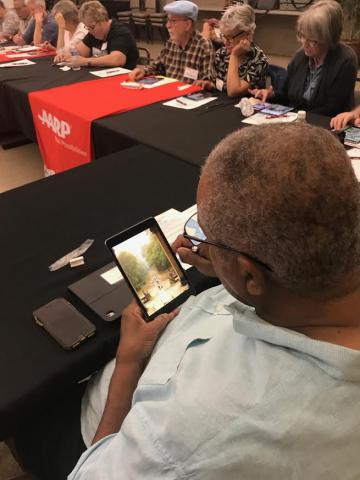 Kathy Ritchie/KJZZ
Don Frazier decided to take AARP's tech class after he and his wife were given an tablet.

"I brought her because she says I'm not a very good teacher," said Bates with a laugh. "She showed me one time and I’m supposed to get it."

So, she came here to learn how to use her iPad.

"Everybody we know, our family, they want to contact her now they can email her," said Bates.

Now remember, Land worked at a time when computers weren’t really available in the workplace, so she used pen and paper. Typewriters were certainly a thing, but Land doesn’t remember using one in her line of work.

She retired around the time computers were being introduced to her office.

But according to a 2018 survey by AARP, 90 percent of people over the age of 50 own a computer or laptop; another 70 percent say they use a smartphone. When it comes to tablets, well, that number drops to about 40 percent— and that might be why today’s class is packed.

Don Frazier is sitting just a few seats down from Land. He came here after his wife got a new phone.

"And with the new phone, we got a new tablet. And then they sent me a text about the class," he said. "I don’t know how to turn it on, so I’m going."

Frazier’s being a bit tongue-in-cheek here — he worked with computers prior to retiring.

AARP Arizona will host a total of seven tech classes this year. Dana Kennedy, state director for the nonprofit organization, says these classes are hugely important in era where almost everyone has a cellphone — and everyone has received one of those robocalls.

"The scams are definitely out there, and so we’re just making sure people are aware of, you know be, careful what you click on, identify good sites, you know, how to verify if it is a legitimate source of information," she said.

"The scams are definitely out there, and so we’re just making sure people are aware ... be careful what you click on, identify good sites ..."
— Dana Kennedy, AARP Arizona

Frazier said e he gets plenty of those and they go to his spam box and he later deletes them.

Veronica Walker also gets robocalls, but she’s not worried about them, "because I know what to do," she said. "No. Cancel. Cross it out. Exit out. Because if I don’t know, there’s no need for me to get on it."

Another reason for this class, says Kennedy, is to combat social isolation. That’s why Walker is here.

"Life is too short to sit in the house and look at the four walls," she said.

Ironically, social isolation could be one reason why older adults might be more susceptible to scams or even so-called "fake news." 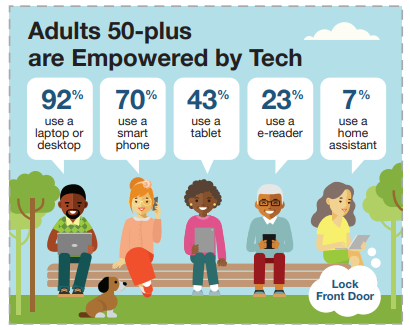 "As you get older you’re more likely to lose that everyday interaction at work or with your family in some cases," said Alexander Halavais, an associate professor of Critical Data Studies at ASU. "And so if you don’t have that immediate check where you can turn to someone and say is this weird, then you don’t have that to rely on as much.

Scams are a big problem, according the Arizona Attorney General’s Office. A spokesperson told KJZZ that the majority of consumer complaints come from seniors. And the biggest offenders are those scams claiming to be from a government agency like the IRS or the office of Social Security.

And then there’s "fake news." A study in the journal Science Advances found that it was significantly more common for older adults to spread misinformation on Facebook during the 2016 presidential election.

But fake news isn’t new. Take the Great Moon Hoax of 1835, for example, "which was a story about an observatory that had seen bat-winged creatures on the moon, and it was a series of stories that a lot of people took pretty seriously," says Halavais. "This was in the New York Sun."

A newspaper that, at the time, cost a penny. According to the Library of Congress,  its popularity was largely attributed to its more sensational “and sometimes fabricated stories.”

Digital literacy is paramount for everyone who handles a device — regardless of their age. But the reasons why older adults might be more susceptible to scams or misinformation is still being researched. 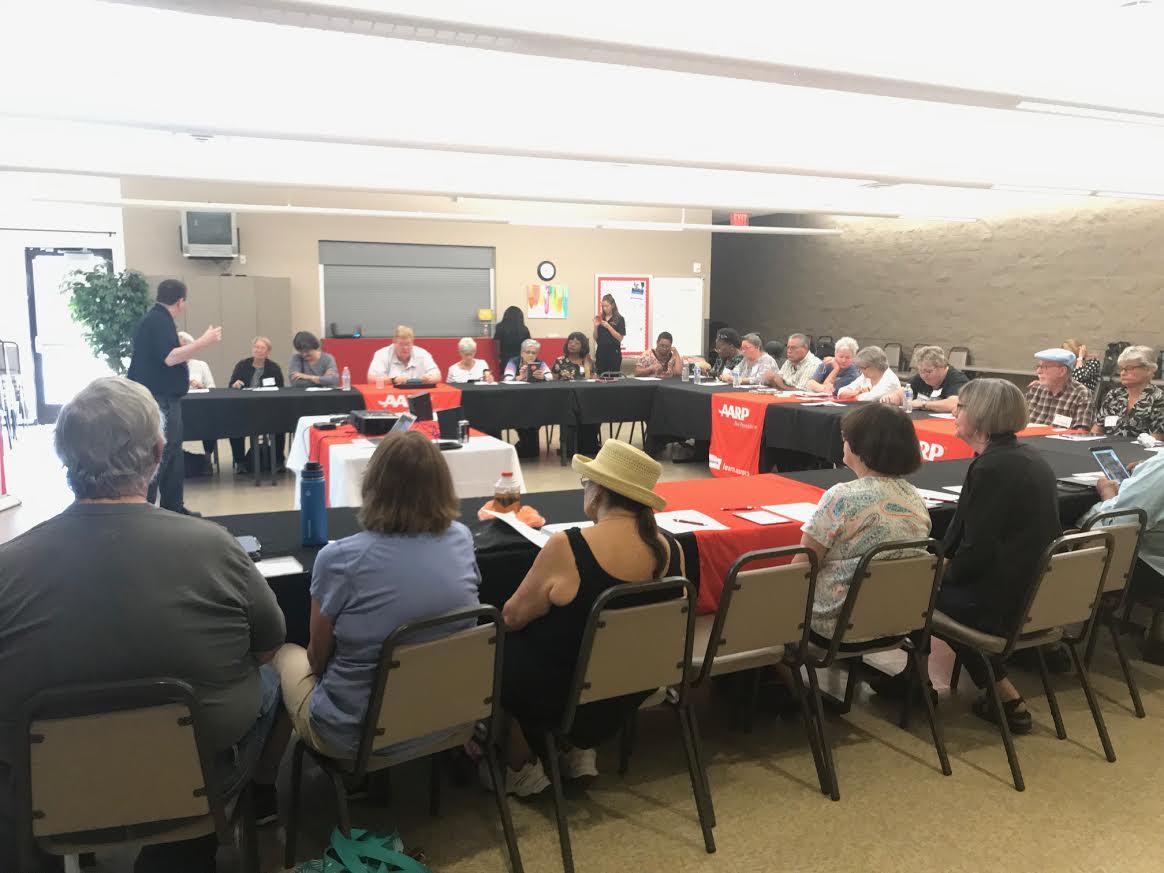 Kathy Ritchie/KJZZ
AARP hosted a beginner's tech class. It was a packed room with older adults looking to learn the basics of their i-ad. 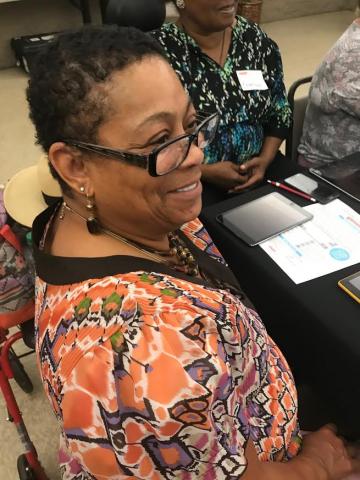 Kathy Ritchie/KJZZ
Veronica Walker came to the class with a friend. Walker says she's comfortable with technology, but enjoys getting out of the house, which is why she decided to attend the class.