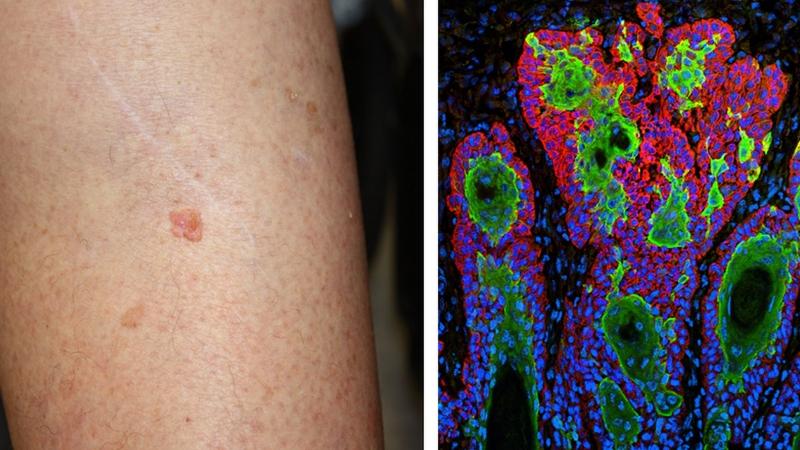 Kelly Nelson/National Cancer Institute, Markus Schrober and Elaine Fuchs/The Rockefeller University
A macro and micro look at skin cancer: (left) A leg with a squamous cell carcinoma lesion and (right) a colorized photomicrograph of the cancer at the cellular level.

Skin cancer is the most commonly diagnosed cancer in the United States, with annual treatment costs topping $8 billion.

Now, a new study has found a novel way to improve one skin cancer surgery and lower medical costs: A letter from a colleague.

The research appears in the journal JAMA Dermatology.

Mohs micrographic surgery (MMS) — a state-of-the-art technique used largely on the head, neck and extremities — works in stages: cut out blocks of cancer and surrounding tissue, examine them under a microscope while the patient waits and repeat as needed.

Payment occurs on a per-block basis, so surgeons who remove too many blocks drive up costs.

When researchers sent such surgeons a "Dear colleague" intervention letter, 83 percent of them improved their techniques and removed fewer unnecessary blocks.

Researcher calculated those improvements amounted to a savings of $11 million in the first year alone.

"If we listen to doctors who are practicing on the front lines of medicine, they will often tell us where the waste is and how to improve quality," he said.

Makary is also principal investigator of Improving Wisely, a program that builds consensus among doctors regarding overly performed practices in their specialties.

Researchers then examine medical claims to determine which physicians fall within the bell curve of common practices for that practice, and which fall far outside of it.

"Most doctors do the right thing and always try to, but outliers sometimes need help, guidance or, every now and then, some more scrutinized oversight," said Makary.

Makary said his group had originally braced for blowback from the physicians they contacted, despite the confidentiality of the intervention, but overall they received positive responses.

"What we found was emails that said, 'Thank you for letting me know where I stand. How can I get some help? Can you please direct me to educational resources? This is an important intervention, and I want to do better.'"

Makary said doctors who receive personal interventions tend to respond more positively than those who receive poor institution-level rankings, which they could more easily blame on the performance of others.