Exoplanet Habitability: It’s What’s On The Inside That Counts? 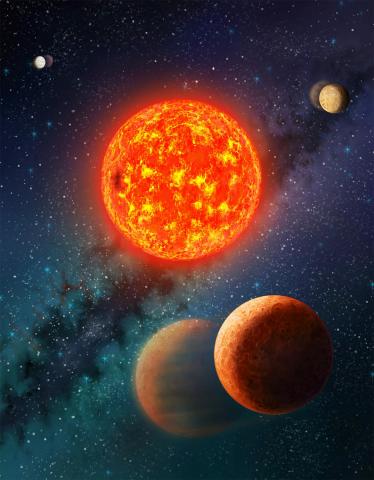 Danielle Futselaa/SETI Institute
The artistic concept shows the planetary system harboring Kepler-138b, the first exoplanet smaller than Earth with both a mass and size measurement.

Over the next decade, scientists will gather vast stores of data describing the atmospheres of distant worlds. But some of their colleagues argue that the key to a planet's habitability might truly lie in its interior.

The paper appears in the journal Science.

When gauging a planet's prospects for life, scientists use rules of thumb — such as whether a world's orbital distance permits liquid water — while also assessing factors like atmospheric makeup.

But life on Earth also owes its existence to geological forces, including the plate tectonics that help moderate climate and the geomagnetic field that shields the planet from harmful solar wind.

Arizona State University astrophysicist Evgenya Shkolnik, who studies exoplanets but did not participate in the paper, agreed with the authors' call for more work involving exoplanet interiors.

"The planetary atmosphere models don't really include a lot of interior processes. We just don't have that information. We need more models, and we need more experiments, which is what exactly what this article is advocating for," she said.

Currently, scientists are able to approximate the interior makeup of exoplanets based on sizes provided by NASA's Transiting Exoplanet Survey Satellite (TESS) and masses provided by ground-based telescopes.

Unfortunately, more than one composition could explain a given density.

Most of all, it will require scientists from many disciplines working together.

"It's insight to all different kinds of sciences that are forced to work together and all learn from each other to answer something really hard. No one group can do it on their own," said Shkolnik.