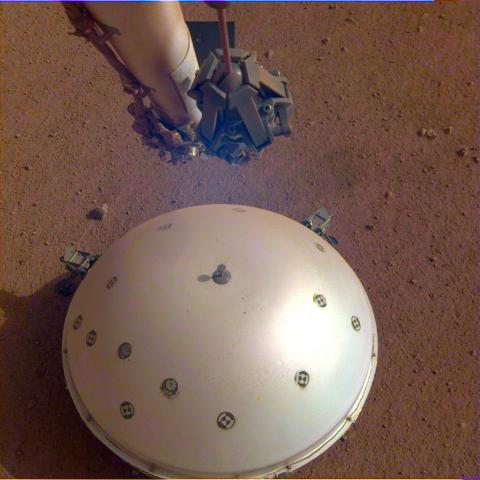 NASA/JPL-Caltech.
InSight's domed Wind and Thermal Shield covers its seismometer. The image was taken on the 110th Martian day, or sol, of the mission. The seismometer is called Seismic Experiment for Interior Structure, or SEIS.

NASA has announced the first clear detection of a quake on Mars. The red planet joins Earth and the moon as one of only three bodies where humans have measured seismic activity.

Scientists have previously recorded a handful of ambiguous vibrations on Mars, but the April 6 detection by NASA's InSight lander was the first to clearly originate from inside the planet.

Seismic activity need not come from plate tectonics; on the moon, for example, it arises from temperature shifts and gravitational stresses.

InSight detects such vibrations using three exceptionally sensitive seismometers that are protected from wind and temperature by a dome.

"You could almost think of it like the first time there was a telescope, and it affords you a vision far beyond the little white dots that you see with the naked eye," he said.

Scientists hope to use vibrations caused by quakes, meteorite strikes and other phenomena to map Mars's structure and learn more about how rocky planets form.