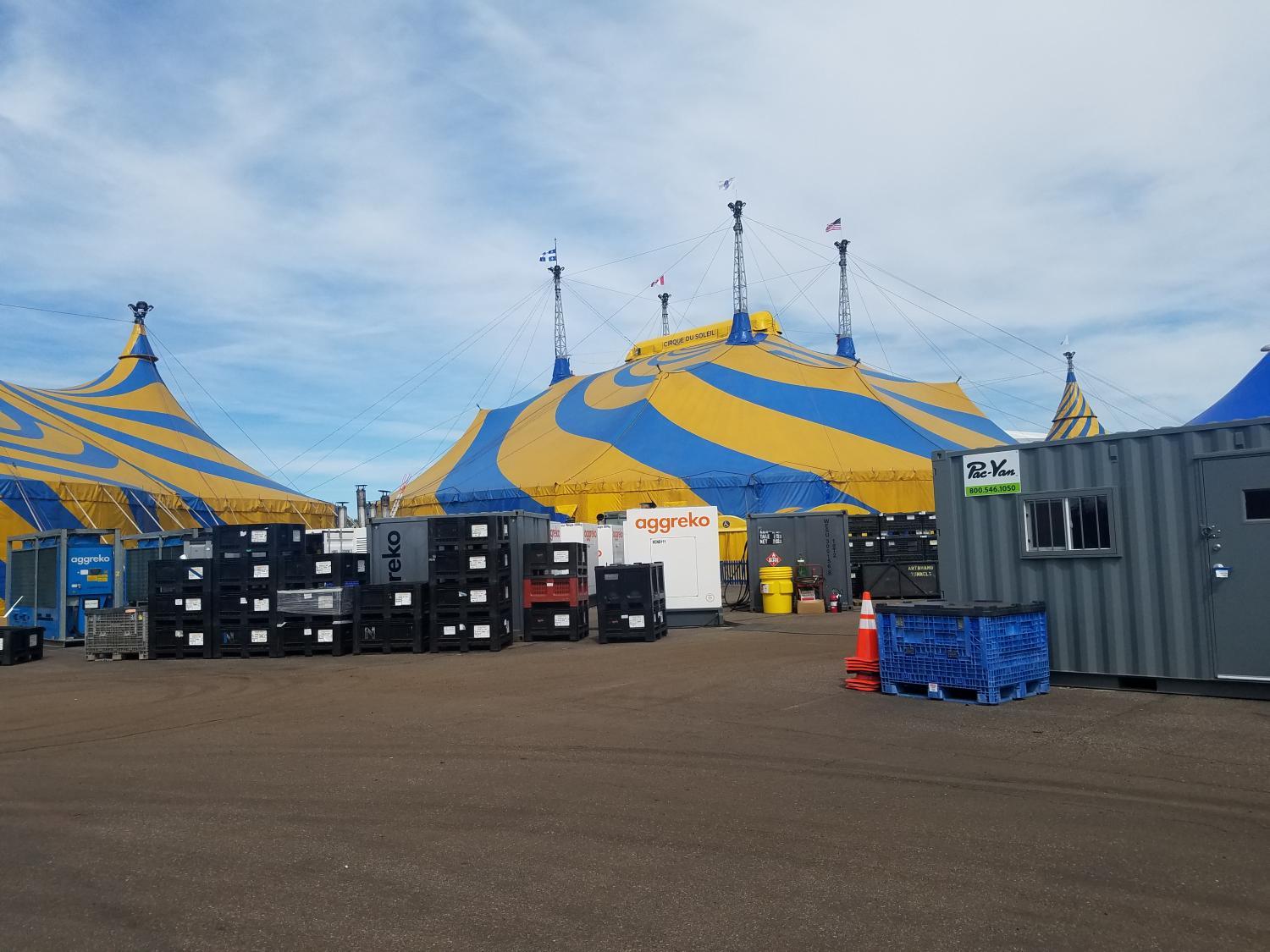 Annika Cline/KJZZ
The show happens under a giant blue and yellow tent, which is set up in each new city.

Back in the day, the circus rolled into town with elephants and cannons that shoot people into the air and a ring leader in a top hat.

In his 1952 movie, "The Greatest Show on Earth," Cecil B. DeMille says behind the scenes, the circus as a fierce, primitive fighting force struggling to survive against impossible odds. The circus comes to Glendale in 2019.

They’re tossed into the air. They swing above the crowd. One man hangs upside down at the top of a pole, then quickly slides down and stops — his nose within an inch of the ground.

They are the conductors and the audience is an orchestra of breaths — being held and exhaled with each new feat.

But the audience here might not know much about the feats that happen off stage. 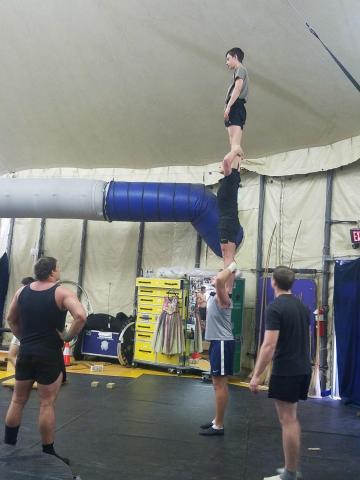 Annika Cline/KJZZ
Performers practice for the show by standing on each other's shoulders and balancing.

The blue and yellow big top is his charge — from the setup to the stitches that need repairing. This tent has been part of Cirque as long as he has.

The show moves to a new city about every six weeks. That’s a lot of moving, considering Cirque shows like "Amaluna" can run for more than a decade.

And in each place, it takes eight days to raise the tent and roll in the trailers.

No computers, he says. Just people hoisting the steel poles and tightening the fabric with mechanical tools.

The end result is a temporary village the crew calls home. Including some things you would find in your own home.

You wouldn’t know this trailer was the kitchen if it wasn’t for the small sign duct taped to the outside.

McCrindle and the kitchen staff dish out more than 300 meals a day from a space that feels like a step above a food truck.

"Every city we pack it all in there and try to get it as tight as possible so it doesn’t move around too much or nothing gets broken, because if something breaks, it’s a problem," he said.

After lunch, the crew is hustling to prepare for tonight’s show. Larry Edwards is in wardrobe steaming a wig.

"I’d worked in theater in Australia before leaving — running away to join the circus like everybody dreams of doing," he said.

That was 12 years ago. Since then, Edwards has hopped around to different Cirque shows as the company expanded. What began as 20 street performers in Canada has ballooned into a billion-dollar global business. "Amaluna" is just one of more than 10 touring shows on the schedule right now, including one done on ice. 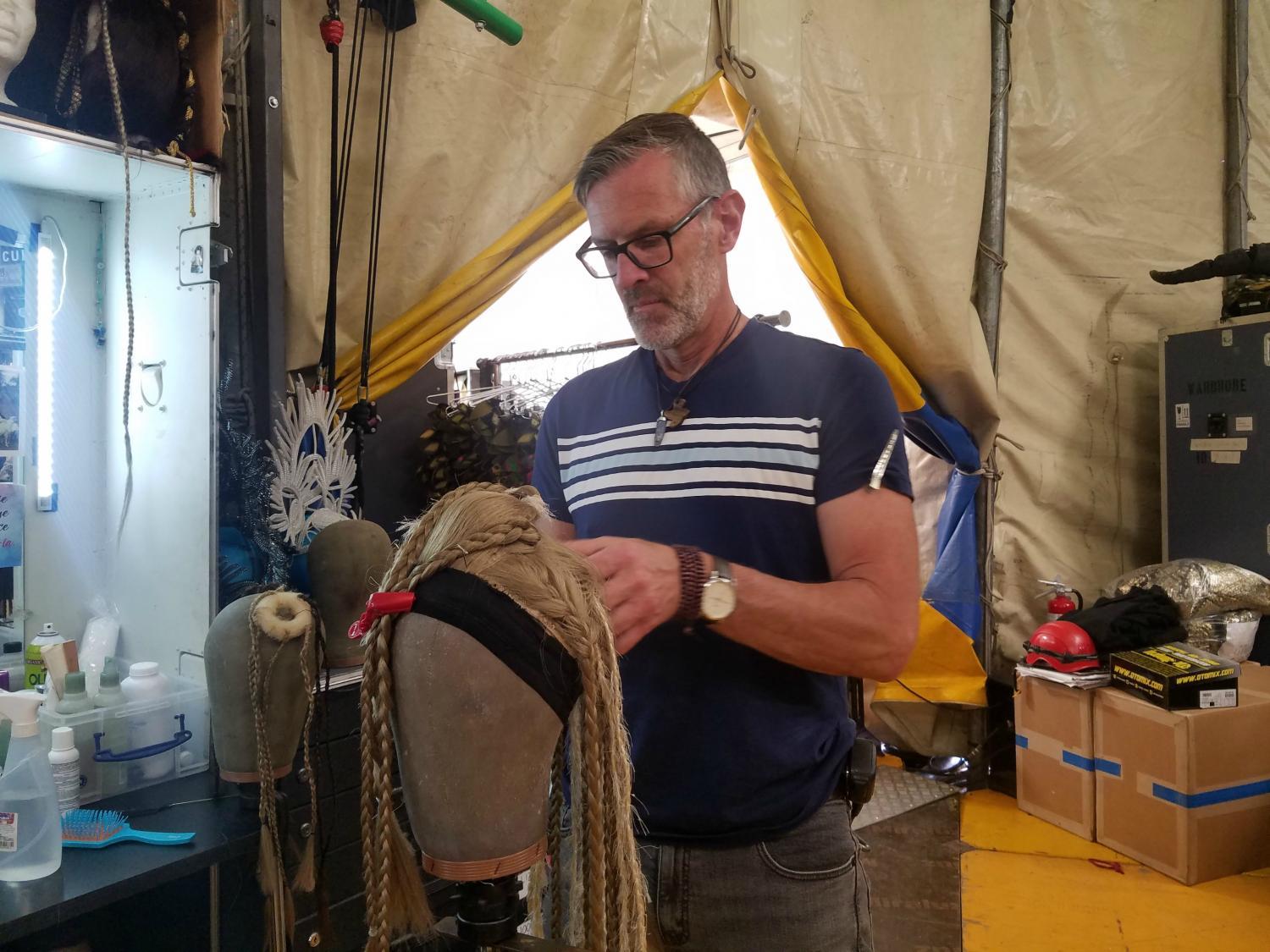 Each show has its own theme and its own costumes. Edwards has to move a green, fabric tail out of the way to sit down at a sewing machine and resole a shoe. Instead of sizes, the shoe shelf has labels like “tree creature” and “balance goddess.”

Edwards says this machine was made in the 1920s, another example of a traditional method that stuck around.

"This is an old machine but it also means it’s got less working parts, and as a touring show, if we have an electronic machine there are more things that can go wrong with it. So this we’ve been traveling with for seven years now and have had no problems," he said.

But the crew enjoys modern comforts like hotel stays and a climate-controlled practice tent.

You can’t ever completely get rid of all the challenges of life on the road, like homesickness, but Edwards says the benefits outweigh the costs.

"For me, it’s been 12 years of the ultimate working holiday. I love what I do, I love the show and the costumes, but every six weeks I get to open my door and I’m in a different part of the world," he said.

They'll hit the road once again in mid-April.