A previously unanalyzed trove of tree rings has given researchers a new perspective on how climate change might affect forests in the Southwest. The news is better, but far from good.

The study appears in the journal "Nature Communications."

The new database was uncovered roughly 10 years ago in a Utah laboratory and contains about 20,000 tree cores. Collected in the 1980s and 1990s, the trees recorded growth patterns dating back to the 1920s.

Because these cores come from trees sampled a part of the U. S. Forest Service Inventory and Analysis Program, they provide a more representative sample of the forests.

"Our new data set has a lot more trees that are sort of experiencing average conditions — your sort of 'Joe Schmoe' in the forest — and that other data set represents trees at the very edge," said co-author Margaret Evans of the University of Arizona's Laboratory of Tree-Ring Research.

Evans explained that more marginal tree ring samples, like those in the International Tree-Ring Data Bank, had been useful for detecting and modeling climate change effects, while the new data better support studying the forests themselves.

When researchers used the same computer models on both sets of tree rings, the new set predicted tree growth would decrease 75 percent by the end of the 21st century.

That's not good, but it's 29 percent less bad than predictions provided by the old set.

The researchers are currently working with scientists from Canada, Mexico and elsewhere in the U.S. to build a continent-wide tree ring database. 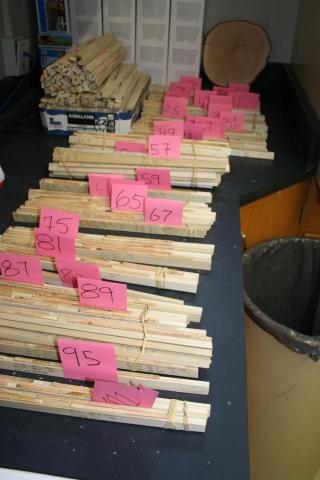 John D. Shaw, U.S. Forest Service
Tree cores from the U.S. Forest Service Forest Inventory and Analysis program are mounted on sticks to make the cores easier to handle and measure. The numbers on the pink tags indicate the county in which the cores were taken.
Science