Is 'Rudolph' Racist? Viewing Old Art Through A Modern Lens 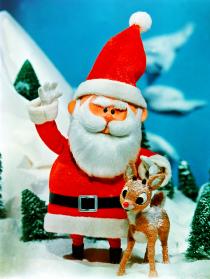 CBS
Rudolph the Red-Nosed Reindeer and Santa Claus from the 1964 Rankin/Bass film.

During this winter holiday season, maybe you’ve turned on the television or dialed up a subscriber service to catch one of the old classics — like "Rudolph the Red-Nosed Reindeer" or "A Charlie Brown Christmas."

But some on social media are saying that Rudolph, in particular, has racist and bigoted elements and is out of step with our current sensibilities.

So how should we measure these pieces — based on what they were like when they were created, or more within the context of today?

To talk about those concepts, The Show reached out to Michelle Saint, philosophy lecturer at Arizona State University.