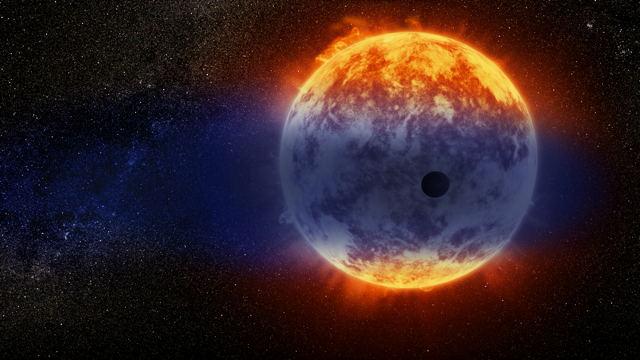 NASA, ESA, and D. Player (STScI)
This artwork shows hydrogen streaming off a warm, Neptune-sized planet 97 light-years from Earth. The star's intense radiation heats the hydrogen in the planet's upper atmosphere until it escapes into space.

The paper appears in the journal "Astronomy & Astrophysics."

Where are all of the "hot Neptunes"? Do they lurk somewhere in the current data, where scientists have simply miscategorized them? Or have they disappeared over time?

A recently analyzed Neptune-like world that is rapidly losing its atmosphere could help settle that question.

The authors made their observations using the Hubble Space Telescope as part of the Panchromatic Comparative Exoplanet Treasury program, which entails in-depth examinations of the atmospheres of known exoplanets.

The planet, GJ 3470b, orbits near its relatively cool M-dwarf star, so its temperatures reach around 800 Fahrenheit. That's toasty, but well shy of the 1,300-plus degree temperatures of many hot Jupiters.

Though cool, the star is highly active, and it pumps out enough extreme ultraviolet radiation and X-rays to heat and expand GJ 3470b's atmosphere past the point where the planet's gravity can hold onto it.

While massive Jupiter-like worlds can withstand such losses, smaller gas giants might lose all but their rocky cores, leaving behind large Earth-like worlds. This would explain the so called "desert region" in the data.

"The region where you don't have a lot of hot, Neptune-type planets might be due to the planets having lost so much mass that then you have a lower-mass planet," said Gilda Ballester of The University of Arizona's Lunar and Planetary Laboratory, who co-authored the study.

Under other circumstances, a Neptune like world might retain some of its atmosphere and shrink down to a mini-Neptune. It all comes down to combinations of mass, radius and temperature.

As for the data "desert," the debate continues. Some believe the lack of worlds in this category results from errors in analysis and classification.

"There are some groups that are saying that some of the systems might have had some error involved in the analysis of those basic math and radius characteristics," she said.

If true, new analyses could gradually fill in that gap by reclassifying planets as hot Neptunes.

"There is a lot of validity to the extreme mass loss. I just can't tell you for sure, from my perspective, that this is the reason that you have a lack of these populations," said Ballester. "That's an important question we should look into with more observations, if we can get them."