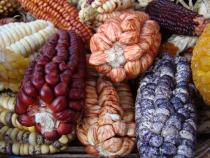 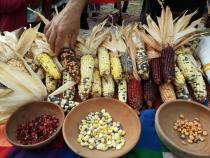 Natália Carolina de Almeida Silva.
Varieties of Avati ete'I, maize sacred to the Guaraní indigenous people of South America, at a seed exchange fair in Uruguay. Although the team studied maize from gene banks, past work with indigenous groups helped guide their discussion.

Corn, or maize, took a 9,000-year journey of domestication on its way to our holiday tables. But new research in the journal "Science" suggests that the path took more twists and turns than once thought.

Maize is one of the most important staple crops. Farms produce around 1 billion metric tons of the grain each year, one-third of which originates in the U.S.

The domestication of maize from wild teosinte grass was a landmark event once thought limited to Mexico's Balsas River Valley.

But recent genetic evidence shows domestication taking place in what is now Brazil and Bolivia while Mexican domestication was still underway 5,000 years ago.

"So the question is, how can you have maize flourishing in South America — being grown by people for this period of time — meanwhile, it's not yet even fully domesticated back where it originated," said lead author Logan Kistler of the National Museum of Natural History.

The team reasoned that mobile groups must have carried partly domesticated "proto-maize" to the southwest Amazon more than 6,500 years ago.

"Ultimately, we found genetic evidence that South American maize was carried out of Mexico while domestication was still ongoing. And then the domestication processes simply continued in a secondary location," said Kistler.