It doesn’t matter if you live in a small town or the big city, if you live in Arizona, you probably live close to hiking trails. But that doesn’t necessarily mean you feel comfortable on them. In the final installment of KJZZ's series about hiking and diversity, we meet a woman who wants people from all walks of life to take a hike.

Sirena Rana Dufault
Sirena Rana Dufault has hiked the entire Arizona Trail twice, and now she's writing a book about the trail, with the hopes of getting people of all backgrounds and abilities out on it. Above, she's at the Tanner Trail at the Grand Canyon.

Sirena Rana Dufault has hiked up Mount Lemmon, near Tucson, more times than she can say. But as she walked past pine trees and thick brush, she still had a sense of wonder, noticing little things, including a tiny, dust-colored lizard skittering past.

The baby rested his chubby belly against her warm hands and quickly fell asleep.

Dufault looks at home here, in the forest, on the trail.

“If you just see people who don’t look like you, it just feels different,” she said.

As the daughter of a man from India and woman from Italy, she gets it. Dufault has hiked the entire 800-mile Arizona Trail — twice — and says the farther you get into the backcountry, the fewer hikers of color you see.

Anel Arriola
For some, the problem is not being afraid of the outdoors, as much as it is not knowing it's available to them. Anel Arriola, who was born in Mexico, said it took her several years after moving to the U.S. to start hiking.

And that can be intimidating — and limiting.

“Not feeling safe has definitely — has kept me from enjoying that,” she said. “And you know, maybe one day I will, and but I don’t feel that right now.”

And just to be clear, Garcia — who was born in Mexico — was talking about safety from people. Jaye McAuliffe, who is white, feels that, too. She’s a transgender woman, who feels vulnerable in the wilderness in a way she never did before she came out.

“It might be way more likely that I get lost or get attacked by a bear, but the fear of other people, definitely weighs stronger in my mind,” she said.

That fear isn’t something that Anel Arriola feels — but her mother sure used to — whenever Arriola would go on a hike.

“And I think it has to do with the publicity that is given to, probably, hiking, in our community,” she said.

Meaning nowhere near enough publicity in the Hispanic community.

The 35-year-old says that even now, in a time when there’s so much information about trails online and on apps, the Hispanic community — and especially the Spanish-speaking community — is largely left out of the conversation.

When she moved here from Mexico City, she was young and bilingual, but still, “it took me to meet someone who was hiking, for me to actually get out and hike,” she said. 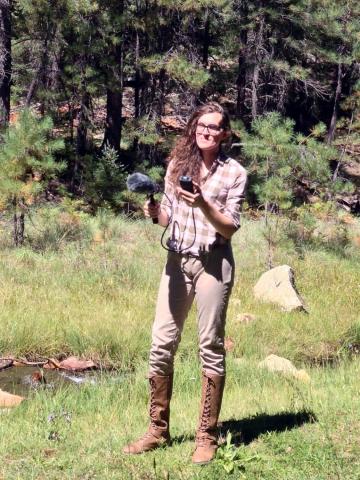 Jaye McAuliffe
Diversity and hiking is a tricky subject. Many people feel nervous or vulnerable outdoors because of how they may be perceived. As a transgender woman, Jaye McAuliffe says she often tenses up when meeting strangers on the trail.

And that someone was her sister. But not everyone has that person in his or her life, someone to help open the invisible door that keeps people locked out of the wilderness.

Back on Mount Lemmon, she spots a young Indian woman walking toward her with a baby on her back.

“Hi! Do you mind if I take your photo?” Dufault she asked, and the pair struck up a conversation.

Dufault is in the midst of writing a book, “Day Hikes on the Arizona National Scenic Trail,” set to be released in 2020 by Wilderness Press. The book will break down the 800-mile trek into dozens of shorter, digestible hikes for different ability levels. But also, and maybe just as important, it will include photos of all types of people on the trail.

Dufault will soon be submitting to her publisher pictures of black hikers, brown hikers, LGBT hikers.

“If you look through magazines and anything about hiking, and it’s just all a bunch of people that don’t look like you, it’s not as inviting,” she said, “and doesn’t make you feel like you have a place.”

And she thinks everyone has a place here — even her, a former Chicago girl, who only got into hiking in college, after she was hit by a car while walking and developed fibromyalgia.

Before she started hiking, she was on the road to up to giving up.

“This gave me my life back,” she said.

Then her eyes lit up and darted away, toward an explosion of blue flowers on the side of the trail.

And she looked delighted, like it was the first time she’d ever see them.

Learn more about Sirena Rana Dufault and her work at trailsinspire.com.