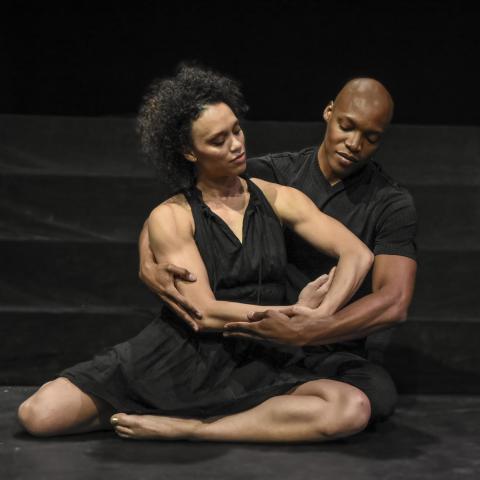 Since its debut in 1961, Langston Hughes' Black Nativity has anchored itself in Black theaters, appearing year after year on their stages, including at the Black Theatre Troupe right here in Phoenix. The performance is packed with gospel hits as it retells the classic nativity story with an all-Black cast.

KJZZ’s Annika Cline was in the audience this weekend.

"This is a very, very spirit-filled show to say the least," said Director David Hemphill. "You’re subject to have someone next to you crying. Someone may jump up and wave their hand. Do not be afraid! Do not be afraid if someone is touched by the high spirit of this show.

Hemphill is trying to give new audience members a heads up that by the end of the show, this is bound to happen.

"It’s all part of the African American gospel tradition," he said.

Hemphill has been directing Black Nativity at this theater for 20 years. Each holiday season, a simple set overflows with sound from a big ensemble of kids and adults, while the roles of Mary and Joseph are wordless — they only dance as in the original Langston Hughes production.

Music dominates but each song is punctuated with an appearance by the narrator. And if he sounds like he’s delivering a sermon on a Sunday morning, well, he’s had lots of practice doing exactly that.

"Outside of the theater I am a pastor. I founded a church just under two years ago," said Pastor Jeremy Jones.

Pastor Jones said Langston Hughes did something very important when he rooted the story of Jesus firmly in African and African-American religious tradition.

"Though my ancestors were brought here involuntarily, we still received the gospel," he said. "We have taken ownership of the story. It’s not owned by any particular ethnicity, but we have taken possession of it in our own culture, our own style, our own music. And the story hasn’t changed, but the method in which it’s communicated is all ours."

From Jones, to the 27-member ensemble, to the audience, Black Nativity brings people into this theater who only come for this show. Director David Hemphill estimates the entire production only includes about five of their regular performers.

"They would never ever act in an August Wilson play," he said. "But Black Nativity gives them the opportunity to participate in theater. So it’s well-rounded participation."

And this theater needs the tradition of Black Nativity.

"This season is on track for it to be at least 40 percent of our revenue," said Hemphill.

The Show asked Hemphill if he ever took an off-year from the production and whether he noticed any difference.

"Oh god yes. Three seasons we didn’t do it. And three seasons, revenue went right down the gulley," he said.

In financial terms, it’s their Nutcracker, their Christmas Carol, but for the audience it’s not comparable to either of those.

We caught first-time viewers Brandon and Michelle Thompson right after the show.

"You can certainly tell the genuineness of this versus some of the choreographed, staged stuff that’s pumped out every year, said Brandon Thompson. "There’s certainly just a realness about what we saw tonight, right?"

"Definitely a realness. And then a reminder of our background. So that made it extra special," said Michelle Thompson

Everyone here knows how this story ends, and that’s exactly why they come back to see it — and sing along — again.