Hiking with disabilities: Making wilderness accessible to everyone

Famed naturalist John Muir once wrote that “going to the woods is going home.” Many feel that connection to wilderness, but disabilities can make people feel locked out of it. In part two of a three-part series about diverse hikers, we learn about the importance of making hiking accessible to everyone. 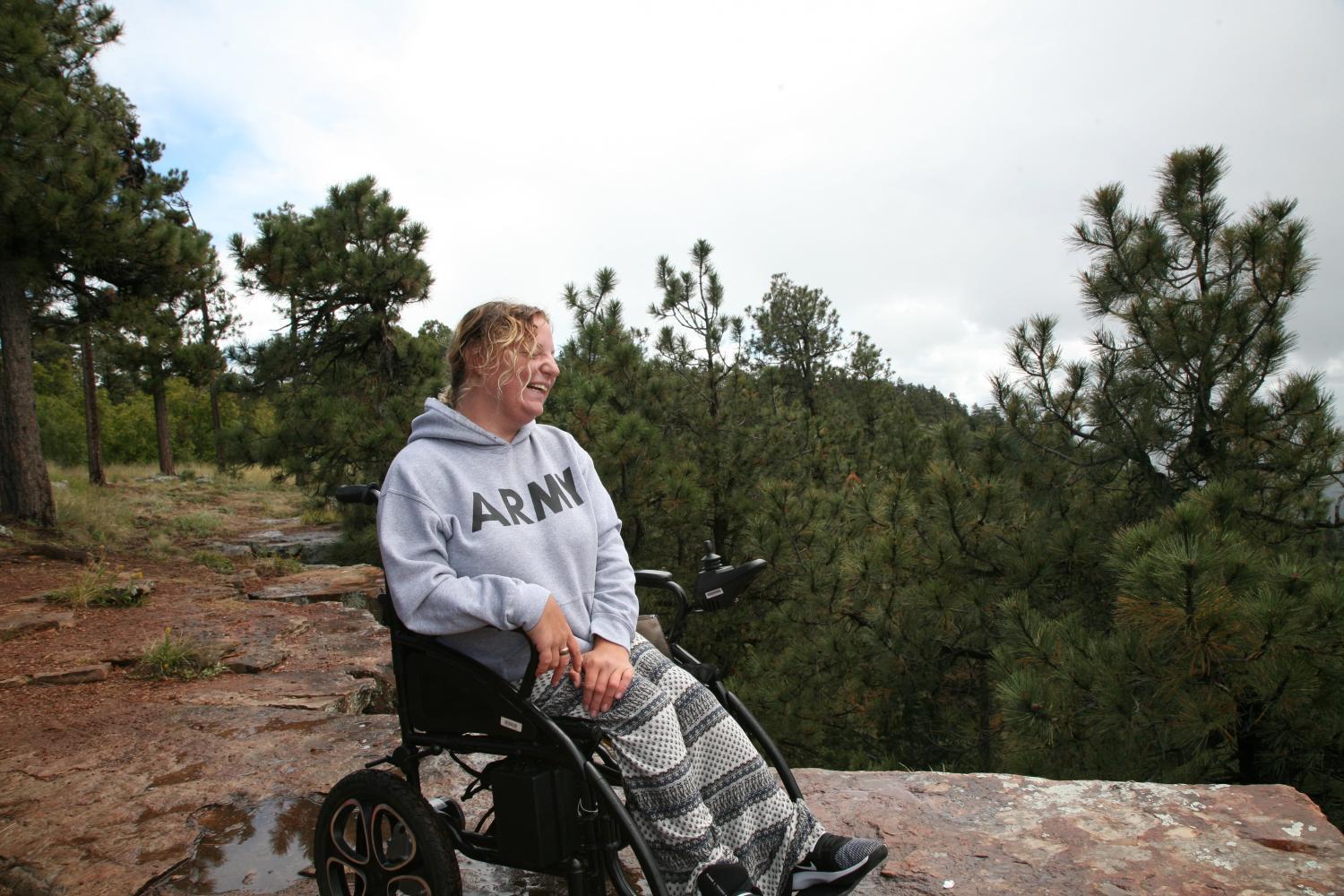 Stina Sieg/KJZZ
Hiking can feel inacessible to people with disabilities, but there are inexpensive (and sometimes even free) programs that open up the outdoors to everyone. Carly Verbeke laughs near the edge of the Mogollon Rim.

At 22, Carly Verbeke has been to Europe twice. But until just a few minutes ago, she had never been on a hike. Now, for the first time, her wheelchair is rolling past tall pine trees and through the smell of wet earth, on a flat, paved trail.

She said her chair isn’t even rated to go outside.

“Apparently, people with disabilities just stay in their house all the time,” she said, with a laugh. “That’s what we do!”

Verbeke, who was born with cerebral palsy, is in a dispersed pack of wheelchairs gliding toward the Mogollon Rim, outside of Payson. Friends, family and aides are walking alongside, and so are a few people with intellectual and other disabilities.

It took them about three hours on a shuttle to get here, but Verbeke can feel how important this is.

“If we’re not able to able to get out here and see it and just reset from the everyday life, then we’re going to go crazy, at some point,” she said.

There are programs that get people with disabilities into nature in just about every state.

“And people just don’t know about it,” said Loren Worthington, talking from a paved, gently uphill trail at Papago Park in Phoenix.

He’s with Ability360, the disability advocacy group that sponsored the Mogollon Rim hike, along with a group called Daring Adventures and other partners. These trips are cheap for participants — only $15, including transportation and access to fancy equipment.

The idea, said Worthington, is to give people a taste of the outdoors.

Once you love it, “you’ll find a way to just start getting out there more often,” he said.

It happened to him. The 54-year-old has been a paraplegic for more than 30 years, after a baseball accident left his legs paralyzed and his hands partially so.

Worthington had loved sports, but put that on the backburner after the accident. 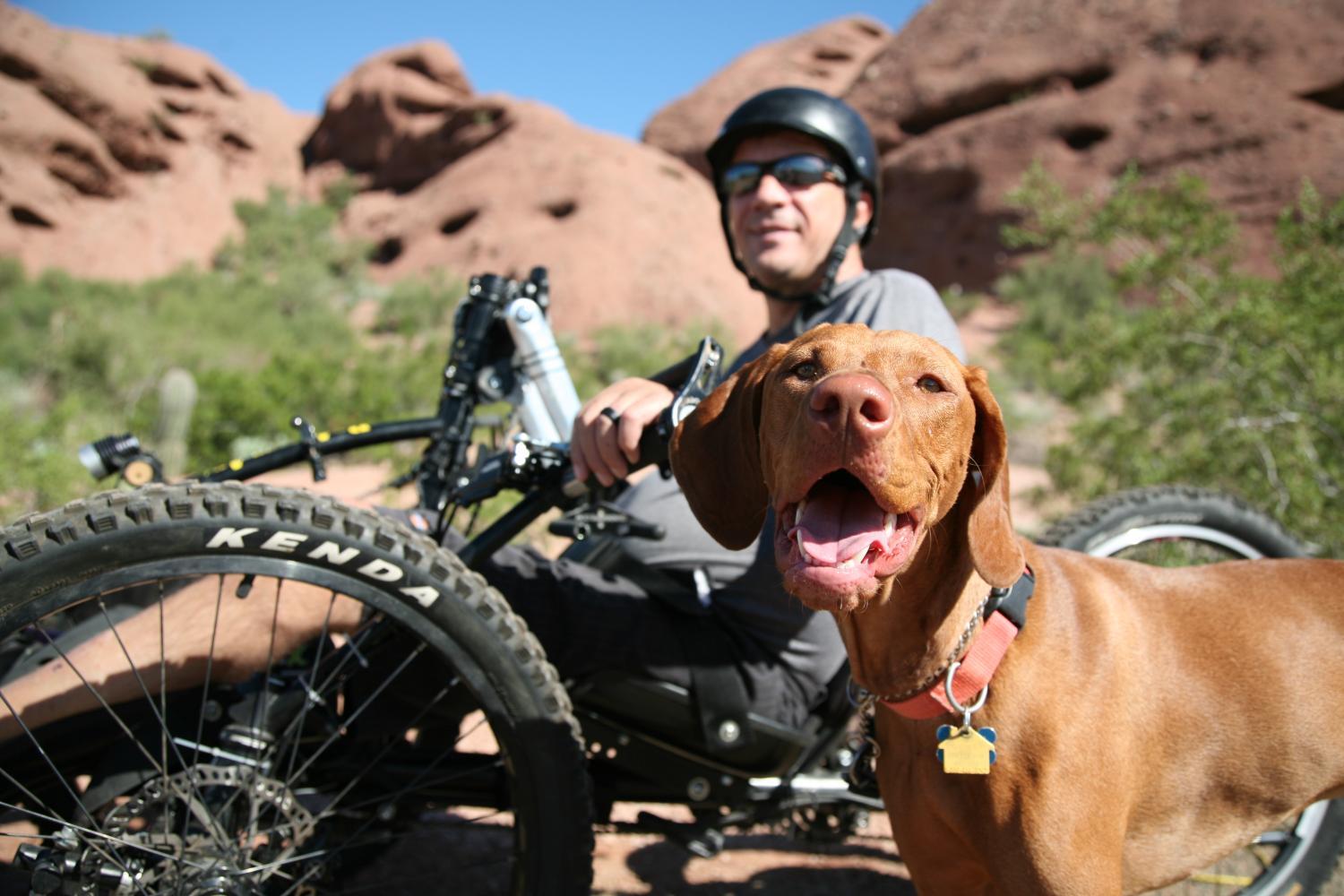 Stina Sieg/KJZZ
Loren Worthington, who works with Ability360, says he's on his hand bike as often as he can.

He’s in a kind of lounging position, and propelling himself forward by pushing on pedals with his hands, a battery assisting him up the hills. Since buying his hand bike a few years ago, Worthington says he’s on it every chance he can get, often with his wife and dogs right alongside.

With a disability, it’s easy to stay indoors, he said, but if you get people outside just one time, things can start to change.

“There’s, like, this recall in their brain of what they used to do, or of the one time they went with their high school or something like that,” he said, “and they realize that they just spent four hours without their phone, or without the internet, and it was OK.”

Back at the Mogollon Rim, the hiking group rolled and walked their way to an overlook.

As she stared up at the misty sky and down at the dark-green forest, hundreds of feet below, Carly Verbeke didn’t stop smiling.

“I would like to do this kind of thing every single day, if I could,” she said.

For her, this is a beginning. For Ralph Sweeden, it’s more of a return.

Wearing a sweatshirt that says “Navy” and a handlebar mustache, the 74-year-old said he was always outdoorsy, until muscular dystrophy took over his body.

But after a few years of depression, he discovered these hikes — and waterskiing and kayaking and fishing — the kinds of things offered by Ability360 and other groups. 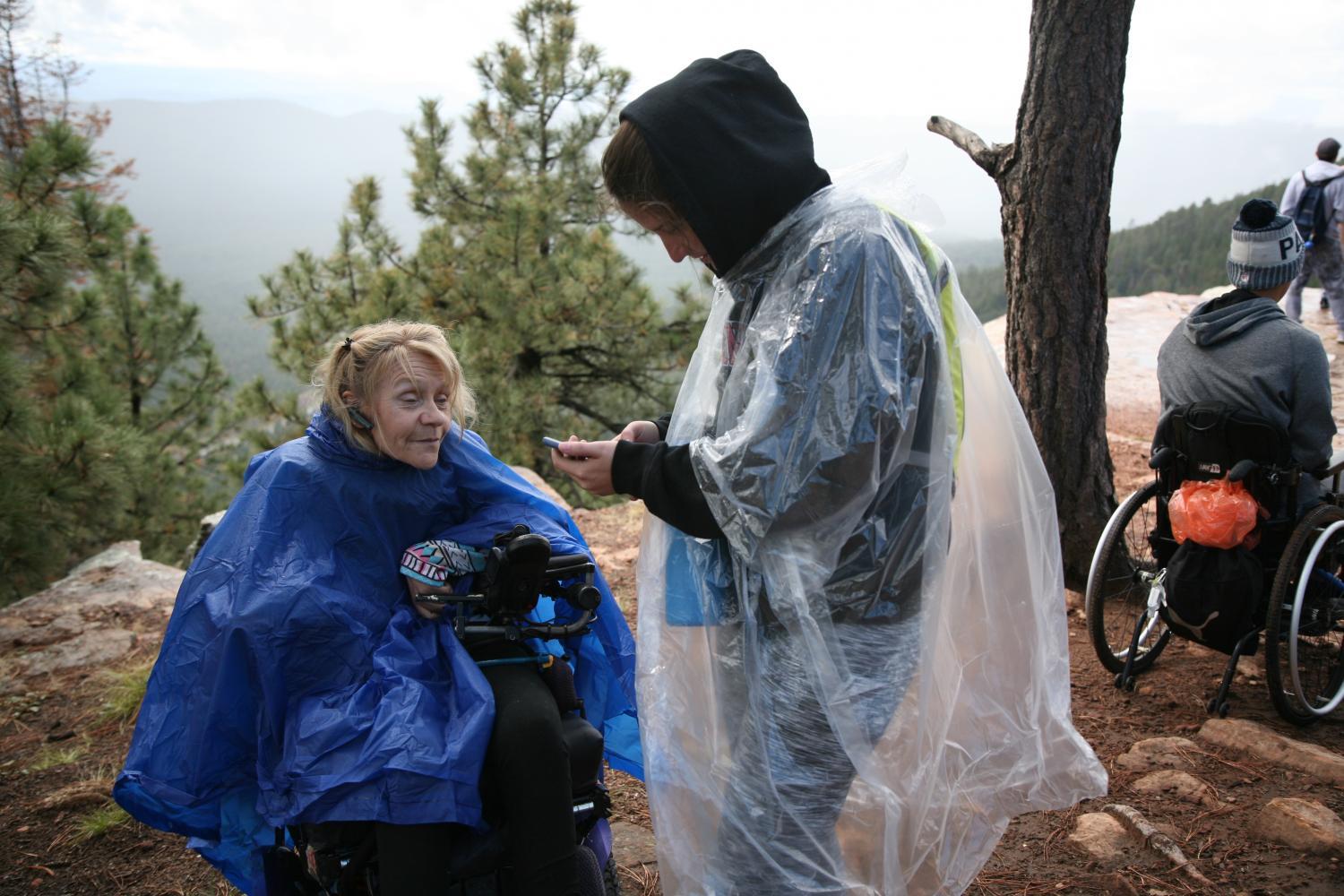 Stina Sieg/KJZZ
It's only the second time hiking for Donna Powers (left) who's been paralyzed from the shoulders down for more than 30 years. She's with her aide, Kayla Westover.

“All these activities, they mean so much to me,” he said, smiling.

Sweeden feels his life has opened up. Donna Powers feels that way, too. She also felt a cold breeze that cut through her, but said being here, close to nature, is part of being a complete person.

The 53-year-old has been paralyzed from the neck down for three decades — and has lived a pretty full life. But this is only her second time hiking.

“My heart and soul are unlimited right now,” she said.

And that’s all from going less than two miles down a trail.

“And smelling, and getting wet, and being cold, and then being warm, and then seeing it is such a beautiful view,” she said.

And it’s right in front of her, not in a book or on a screen. Finally.

For more information about outdoor activities for people with disabilities, visit www.ability360.org.