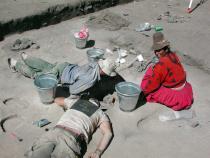 One of the great ongoing debates in anthropology involves how and when prehistoric people populated the Americas. Now, a wide-ranging DNA study paints the most complex picture yet.

The research appears in the journal "Science."

The human story changes to match new evidence: Since the 1980s, scientists have pushed back American settlement — when pioneering hunter-gatherers crossed from Asia to North America via an ice-age land bridge — by 11,000 years.

But, evidence or no evidence, experts have roundly resisted the notion that migrating from Canada to the tip of South America took only one or two millennia.

Yet that's what DNA from the remains of 15 ancient Americans suggests, said lead author José Víctor Moreno Mayar of the University of Copenhagen Centre for GeoGenetics.

The group based their conclusion on the similarity between genomes in areas of North and South America. Had more timed passed between the settlement of each area, more genetic differences would be expected.

Moreno said vast territories brimming with resources would have encouraged settlers to disperse, especially when not faced with human competition.

Moreno also noted an ongoing riddle: the mysterious Australian-like ancestry of some 10,000-year-old remains in the Brazilian Amazon.

"This finding actually opened more questions, and we have very little idea what is going on," he said.

If indigenous Australians came over the land bridge like other early settlers, or if they came via the less likely route of a Pacific raft from Australia, scientists would expect to find Australian-like traces in genomes elsewhere in the New World. So far, they have found no such traces.

"The only place in which we find that genetics ancestry is Brazil," said Moreno.