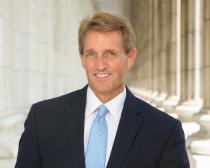 Arizona’s retiring Republican Sen. Jeff Flake says he won’t vote to confirm any judicial nominees unless GOP leaders hold a vote on legislation to protect special counsel Robert Mueller from being fired. Flake and Democratic Sen. Chris Coons went to the Senate floor on Wednesday and tried to bring up legislation for a vote.

Senate Majority Leader Mitch McConnell objected, saying the legislation is unnecessary because he believes Mueller won't be fired. But Flake says he and Coons will keep asking for the vote on a bill to protect Mueller.

"No one is above the law," Flake said. "Our doctrine of separation of powers and the independence of the judicial system is what sets us apart from lawless countries, and presidents do not get to determine who gets investigated and who and what does not."

This bipartisan effort comes after Attorney General Jeff Sessions was asked to resign by President Donald Trump — and was replaced by a loyalist who has criticized the Mueller investigation.