What It's Like To Run Every Single Day — For 40 Years

There’s a well-worn saying that the hardest part of running is putting on your shoes.

When the 64-year-old started his streak in 1978, Jimmy Carter was president. Kids were playing Atari. “Mork and Mindy” was on TV. This morning’s run of 11 miles was on the eve of an incredible milestone.

“So tomorrow, at the Phoenix 10K, it will be 40 years without missing a day of running,” he said. 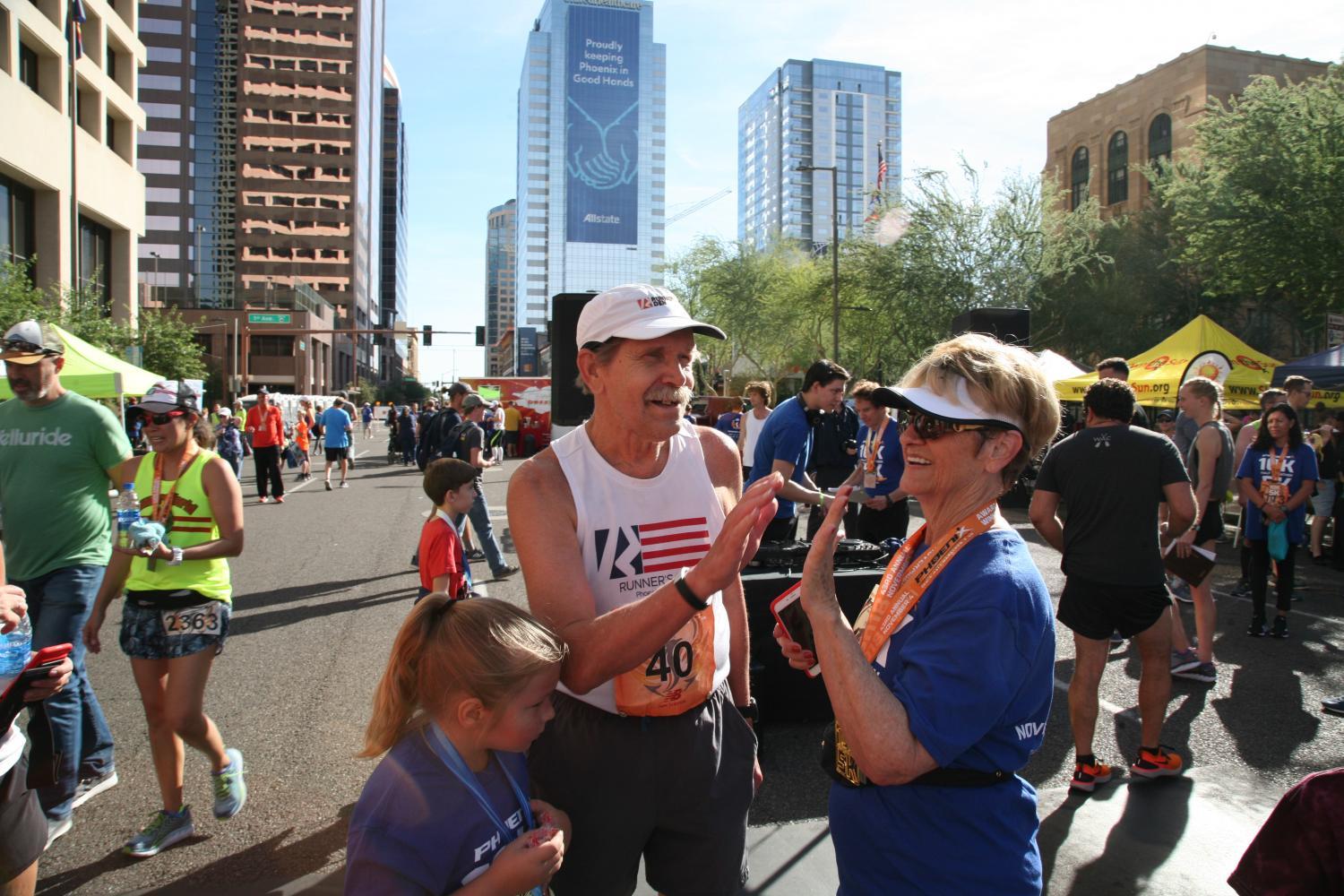 Stina Sieg/KJZZ
When you've had as long a running streak as Craig Davidson, you tend to attract fans. The 64-year-old has been running every single day since 1978.

He hasn’t missed one for anything, logging more than 200,000 miles.

It’s worth mentioning he tore his hip flexor during his 200th marathon. He still finished — and ran the next day.

And while he said this is probably not smart, he’s definitely not alone. The United States Running Streak Association lists hundreds of people who’ve run at least a mile every day for a year or more. Davidson’s 20th on the list, with the top active streak lasting nearly 50 years.

But if that doesn’t sound appealing, don’t feel bad. It doesn’t to Davidson’s running group, either.

And that’s coming from someone who had just run 15 miles.

She’s been meeting up with the group every Saturday for decades, but when it comes to streaking, “I don’t have that discipline,” she said.

That’s a normal response. But Craig Davidson is not normal, and it just takes one conversation with him to see he embraces that.

In addition to running every day, he has this knack for finding money every day he runs.

Davidson said he’s found a $100 bill three times and once found a $50 gold coin. He’s collected an astounding $10,000 since the streak began — though some of the money was too beat-up for the bank to accept.

And he never planned any of this. It all started when he ran the Longest Day Marathon in Brookings, South Dakota. He decided to run the next day, too. Then he decided to see if he could hit 100 days in a row.

And now, he can’t stop. It gives him a sense of accomplishment but it’s also just who he is. He’s the guy who runs every day, and the guy who finds money. 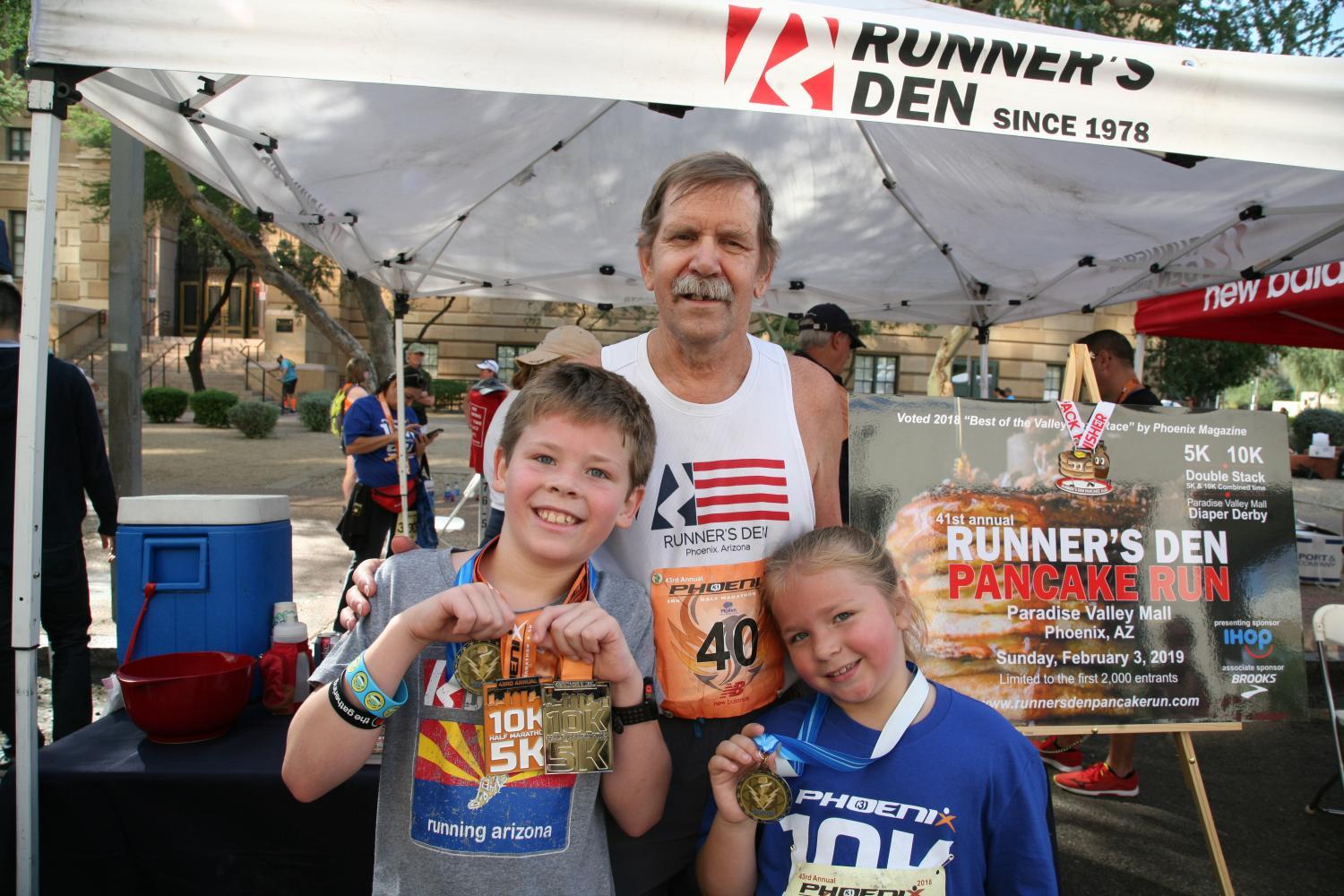 Stina Sieg/KJZZ
Davidson's grandchildren, Jaden and Emma, pose with their medals. Emma ran a mile, while Jaden ran alongside his granddad. Jaden's not talking about streaking — yet.

And he hopes he inspires people to stick to something — even if it’s not streaking.

The morning after the 11-mile run, he was at the starting line with his 9-year-old grandson, Jaden, as the race announcer blared through the speakers.

“Get set…” the announcer said, before the ceremonial gunshot popped. “Go!”

They took off in a sprinting and plodding and loping wave at the Phoenix 10K.

It took an hour and a few cents for the pair to reach the finish line. As they did, Davison’s smiling and waving to the crowd, including his wife.

Their streak’s been going 44 years.

“Here he is!” the announcer boomed as Davidson got closer and closer. “Friends, Arizona Hall of Famer, Craig ‘The Spike’ Davidson. Find any money this morning Craig?”

Of course he did. A penny. The next day, it was five pennies – and five more miles.

You can meet Craig Davidson most days at the Runner’s Den in Phoenix, where he works. You can learn more about his and other runners’ streaks at runeveryday.com.