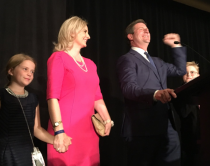 After a tight race, Democrat Tom O’Halleran has retained his seat in the U.S. House, according to the Associated Press.

O’Halleran started his political career as a Republican legislator in the Arizona House of Representatives in 2001 and went on to win election to the state Senate in 2007.

In 2014, he left the Republican Party, citing its policies on education, water and child welfare. He first won election as a Democratic Congressman in 2016.

But that did not diminish his assertion that he had a strong record of working across the aisle in his first term.

The district he represents favored President Donald Trump by 1 percent in the 2016 election.

At the Democratic watch party in Tucson, Kirkpatrick thanked the exuberant crowd.

"I just want you to know that we’re going to get to work tomorrow. I’m going to announce my district director and making ourselves accessible to the people," said Kirkpatrick.

Marquez, Kirkpatrick’s opponent lost Republican backing last month when the GOP stopped funding ads in her favor. The district covers much of Tucson, Pima and Cochise counties and is considered an important border district.

"Well, I think at least in the resources committee and in the education committee, both their secretaries are ethically challenged and I think we need to investigate that and Zinke needs to be looked at. rather than not deal with it at all which has been the case for two years, they are going to be held accountable," said Grijalva.
Early reporting showed him ahead of rival Republican Nick Pierson 60 to 40 percent.

Congressman Gosar won the 4th Congressional District by a wide margin. The mostly red rural district stretches from the northwestern corner of Arizona down to Yuma and wraps around Phoenix.

Gosar, one of the most conservative voices in the House of Representatives, has received press attention for his extreme views. Six of his 10 siblings campaigned against him in online ads.

Gosar said in a tweet he hopes to see his opponent at Thanksgiving along with his "large, somewhat dysfunctional, crazy and wonderful family."

Republican incumbent Andy Biggs held on to his congressional seat and will continue to represent most of the East Valley in the U.S. House.

Biggs secured about 60 percent of the vote as of Tuesday night.

Biggs was the only member of the conservative House Freedom Caucus to vote against the GOP-led health care overhaul. The bill later failed in the Senate on a dramatic thumbs-down vote from the late Sen. John McCain.

Republican incumbent David Schweikert  will continue to represent the 6th Congressional District. He held on to his seat despite an active U.S. House Ethics committee investigation into campaign finance violations.

Schweikert was instrumental in the Trump administration tax overhaul and efforts to scale back the Affordable Care Act.

In June, the House Ethics Committee formed a group to investigate Schweikert and his chief of staff resigned shortly after.

The northeast Valley district has been reliably Republican for years.

Democrat Anita Malik, a technology expert, ran on a platform focusing on job growth and a path to citizenship for Dreamers. She scaled back her campaign in early October after revealing her husband was battling a rare brain condition.

Democrat Ruben Gallego dominated in southwest Phoenix's 7th District in a race with only token opposition.

The race was not as close as when the two women faced each other in a special election in April.

In spring, Lesko won her seat in Arizona's 8th Congressional District by less than 5 points, stoking Democrats’ hopes of flipping the seat in the General Election.

Instead, Lesko’s margin of victory more than doubled.

Tipirneni, a physician running for office for the first time, was the first Democratic candidate in this West Valley district in years.

At a speech Tuesday night, Tipirneni told supporters that she thought Republicans will no longer be taking voter support in the district for granted, but made no promises about running in future elections. The area was previously represented by Republican Trent Franks, until he resigned in scandal late last year.

Stanton won by double-digit percentages in the 9th Congressional District that covers parts of Phoenix and Tempe, including Arizona State University.

He campaigned on strong job growth in Phoenix’s technology sector.

The result was not surprising, as the seat has been held by a Democratic candidate since the district was newly drawn prior to the 2012 election.