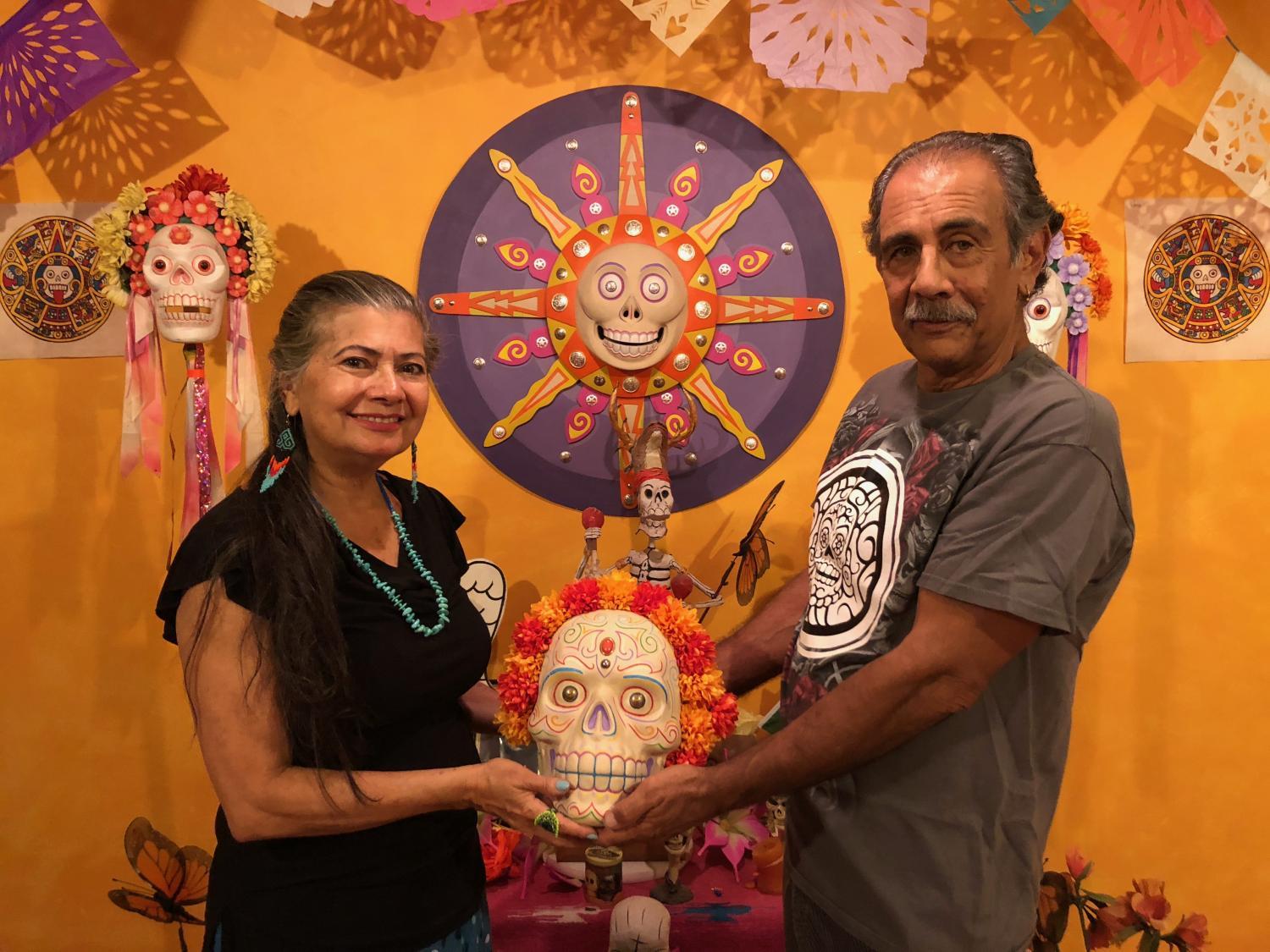 LAUREN GILGER: We all know today is Halloween, but it's also the start of Dia de los Muertos or the Day of the Dead. But, that title is almost a misnomer since the day the dead isn't just one day, and its focus is not really on the dead. In fact, if you ask Carmen and Zarco Guerrero, it is a celebration of life. The Guerrero's are longtime Mesa residents. You may have heard of Zarco's storied career as a mask maker sculptor and performance artist here, and this year they invited me to their colorful home as they prepared for Dia de los Muertos. Every year the two organize Dia de los Muertos festival in Steele Indian School Park and in their own home. They set up a traditional ofrenda, a sort of altar piled high with photos of loved ones who have passed and offerings to welcome their spirits back to the world of the living. Carmen began our conversation by showing me around their ofrenda, which looked to me like an explosion of color art and memories.

CARMEN GUERRERO: So, in this altar I have my parents right there. We have Zarco parents and we also have Zarco’s grandparents, this picture over here. It's them in their house. We tried to also add friends and people in the family that have passed recently. So we have to spruce it up. The altar also must have flowers. So we have the marigold, which is a flower of the dead called zampasushil, in our language. And, the altar also must have papel picado, which is the traditional paper cut outs. These have been doing for thousands of years used to be done with bark of trees, the tree bark. So now we have paper, so we do paper. And, now you can buy them in plastic.

GILGER: You can. So you have the pictures here of past family, past friends. What's the idea behind the declaration of all of this?

CARMEN GUERRERO: The declaration is to remember the good things in life. So, it has to have colors, and flowers and also the smell. Because on the night of Nov. 2, we receive the visitors back. We welcome our beloved departed spirits back so the food is what guides him — the smell of the food, the smell of the flowers, incense.

GILGER: So, on that night, you're going to cook ... their favorite meals and set that out?

CARMEN GUERRERO: Yes, their favorite meals, you know when we make a big pot of red chili so everybody will eat that. And remember, Zarco dad that was one of his favorite food was red chili. So, keep the memory alive and keep talking about them, because they're not completely dead they still live in our memory.

GILGER: Let's talk a little bit about where this comes from, and Zarco you can jump in here as well. But is this the same as All Souls Day, the Catholic holiday?

ZARCO GUERRERO: No. It's completely different, and that's what makes it so important. This is truly the most indigenous and the most American at the same time. And, the most ancient continually celebrated holiday in the American continent — perhaps in the world.

GILGER: Where did it begin?

ZARCO GUERRERO: It began 3,000 years ago with the Olmecs, thousands of years before the coming of the Europeans and the introduction of the concept of All Souls. Dia los Muertos began here in the Southwest in the early '70s during the Chicano Civil Rights Movement, and was a form of resistance and affirmation. It was a protest that we were decolonizing our minds, decolonizing our culture. And, actually, it's not about death at all. There's no word for death in ancient Mexican language of Nahua. No word for death. That means death did not exist in their Cosmo vision. What existed was transition, was rest, was repose, was leaving the burden of the flesh and the bones and the ego behind and transcending to the next role.

GILGER: How is it traditionally practiced in Mexico versus how it's practiced maybe here in the Valley?

CARMEN GUERRERO: Well in Mexico you have the bones of your ancestors in your village. So, there is a whole carpet of yellow petals of the flowers from the market place to the cemetery. And, in Mexico it's celebrated with lots of love and music. So, people go to the cemetery take their foods. Not only they have an altar at home, but they go to the graves they clean it up they spruce it up they put fresh flowers. They hire mariachi to come sing. It's an all-night vigil, and they actually eat on the top of the grave. But, here in the Southwest, a lot of people have migrated here so their graves are not here — like Zarco is one of the few people whose ancestors are buried here in the Mesa cemetery. So, that's why we created a new way of celebrating, which is in the park. It's open to everybody, and it celebrates this beautiful tradition in a community setting.

GILGER: This seems like such a foreign idea, especially here in modern-day America, right, where it's like death is very final thing. It's a sad thing. We wear black right at an American funeral. What's the difference here, and why is that important in terms of the celebration aspect of this?

CARMEN GUERRERO: Well, this it goes to the core of our humanity. Death is a universal phenomenon. Every culture deals with it differently. So, in the American modern culture, contemporary culture, you put the pictures on the wall. Your parents you know probably died in a old folks home, you know, in a rest home. And, it's very kind of like, how to say, a corporate way of dealing with it. So what we bring is this richness of our humanity that we remember. We remember our ancestors. We talk about it, and we celebrate them. We're not here just mourning and crying and feeling sorry because I lost my mom. Everybody's going to lose their mom and dad sooner or later, you know. But, the fact that I can celebrate and remember how wonderful she was — the food that she liked, the song that she liked to hear, the things that she liked to do. So, that's the beauty of bringing in this kind of value, and I think that's why it's embraced by so many people.

GILGER: So, the idea of this holiday, it seems as if it's becoming pretty popular right now, like more popular than it has been in the past. Maybe because of the Disney movie "Coco," maybe because you're starting to see this kind of infiltrate pop culture, in a way. And, I wonder how you feel about that? I know there are voices out there that are concerned about the watering down of this or like the Americanization of this holiday. Is that something that you too were worried about?

ZARCO GUERRERO: "Coco" was created because it was so popular. Why? Because our population has exploded, the demographic has exploded. Culture is not something you hoard. Culture is something that you share. And, this is just one tiny part — the tip of the iceberg — of what is Mexico. What it has been in the past, what it is today and the Mexican diaspora.

CARMEN GUERRO: Well, we've seen how it has spread. How other cultures have embraced. Like he says, culture is not something that we hoard, something that we share. So, we like to share the fact that there's different ways of celebrating your beloved departed than just the way we do it. We remember them. We put flowers. We dance about it. We sing about it you know. And, there's passion. There's love. And, I think that's the highest expression of our humanity.

GILGER: So it sounds like its OK with you that this tradition changes over time.

CARMEN GUERRO: Well, yeah, culture changes. You know it's not the same. We don't live in Oaxaca and we don't have access to thousands of flowers. We just have a few flowers you know what I mean. So, it's a different kind of thing. It's the evolution. You know that change is inevitable.

ZARCO GUERRO: What we see is people appropriating, borrowing, if you will, the images the iconography and using it to sell product. We use the imagery to sell the idea of heritage, of culture, of continuity. When we lose track of our past, we have no clue where we're going. There's a saying — don't cry because they're gone, rejoice because they were here. And, that's exactly what we do. The time to crying is over. We're remembering them. We're laughing with, we're evoking them. We're creating these altars to call upon them with flowers, with beautiful imagery of the calicas — the smiling skull — with the fragrance of the music, with the fragrance of the flowers and the food. We're enticing them back, and we're remembering them, and they never die. They're still alive. So, we are connected to an ancient past and not to a past that was imposed upon us.

GILGER: Carmen and Zarco Guererro, thank you so much.

CARMEN GUERRO: Thank you. Thank you for coming.

ZARCO GUERRO: As my Aztec ancestors would say ... 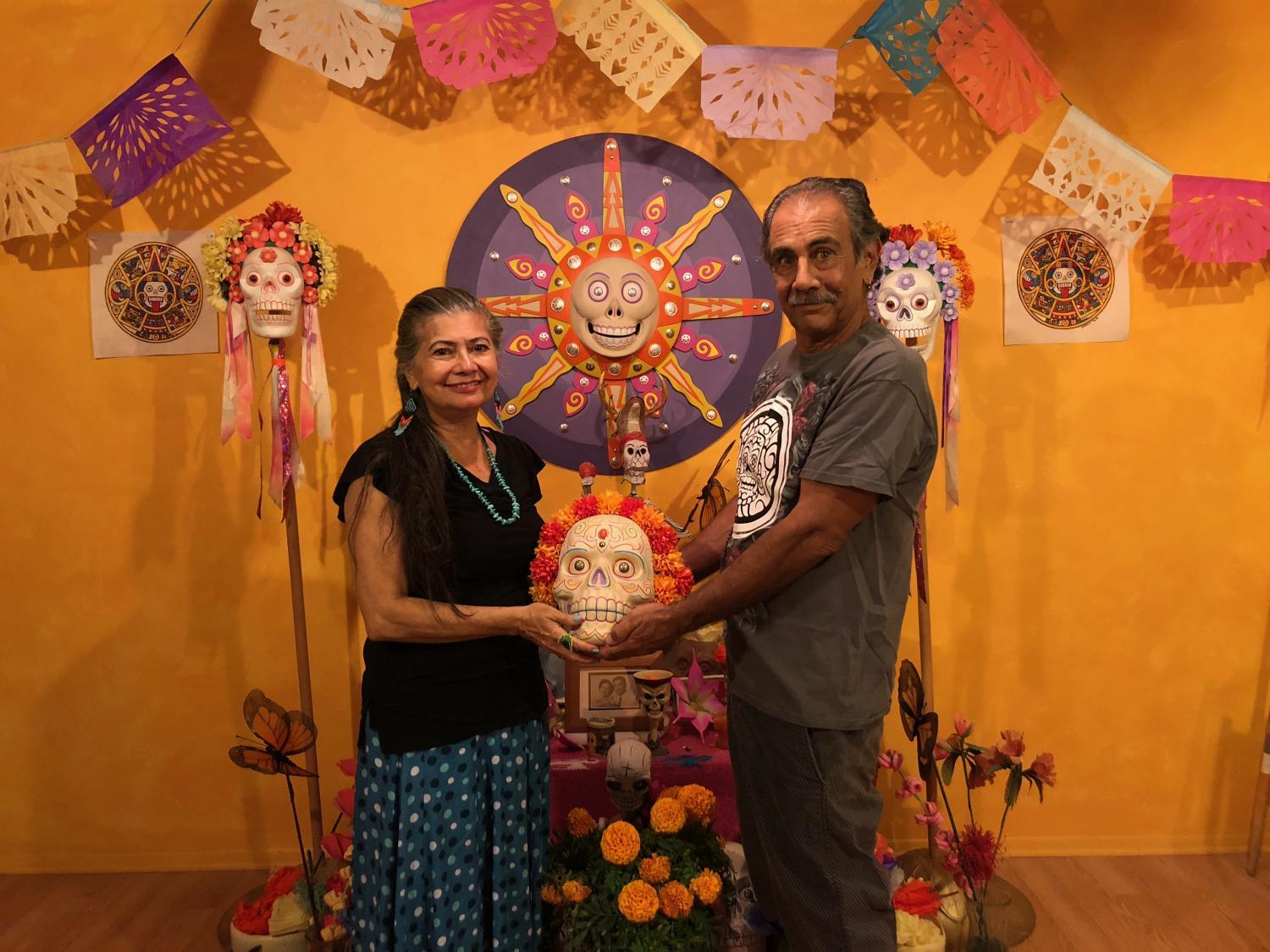