Photo by Ünal Akkemik.
These European black pines in Anatolia, Turkey, were among the trees scientists studied to understand the shifting of the northern boundary of the tropics over the past 800 years. 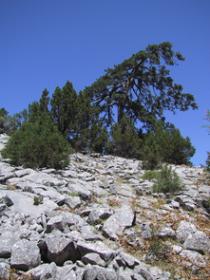 Photo by Ünal Akkemik.
The annual rings of centuries-old black pines (Pinus nigra) such as this one in Anatolia, Turkey, provide natural archives of past climate.

For four decades, the northern edge of the tropics has expanded faster than expected, and no one knows exactly why. Now, an 800-year tree-ring study offers new insights into our climate past — and our climate-change future.

The research appears in the journal Nature Geoscience.

The same air and moisture circulation that drives the trade winds and keeps the tropics lush also maintains deserts and semi-arid regions at the tropical boundaries.

Understanding the hydrology and climatology at these areas, which include the Sonoran and Chihuahuan deserts, is essential to urban and agricultural resource management.

By examining climate data reflected in tree rings at five global sites just north of the tropics, scientists reconstructed the northern boundary's advance and retreat from 1203 to 2003.

"If the tropics move north, the tree-ring data that we used are impacted by that movement: They will experience more drought than normal, and vice-versa," said co-author Valerie Trouet, a tree ring scientist at University of Arizona.

The sites were located in western and central North America, Turkey, northern Pakistan and the Tibetan Plateau.

The research found direct evidence that volcanic eruptions can cause large-scale cooling by sending sulfate aerosols into the stratosphere, where they block incoming solar radiation — something that had previously been predicted by computer models.

For example, scientists credit the Mount Tambora eruption in 1815 with causing the "the year without summer" in 1816.

The study also showed that natural cycles, such as the El Niño Southern Oscillation (ENSO) system or the Pacific North American (PNA) system, exert a strong influence as well.

ENSO is cyclical system that changes global atmospheric circulation, altering temperatures and precipitation. It is tied to changes in sea level pressure across the tropical Pacific. PNA is its counterpart in the North Pacific Ocean and North American continent, and is often influenced by ENSO.

The study does not explain everything about these tropical shifts, but it should provide better data for more advance climate models.

In the meantime, Trouet says, we should consider the droughts and social upheavals that coincided with some of these shifts.

Trouet is referring to the period during the late 16th and early 17th centuries when record droughts struck southwestern and southeastern United States, northern Mexico, Turkey and eastern China.

She and her colleagues next plan to study the expansion of the southern tropical boundary.