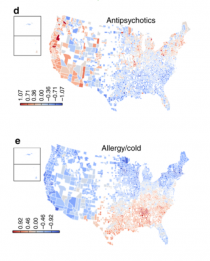 Health care spending in the U.S. amounts to more than $10,000 per person, and drugs are the fastest-growing category of healthcare spending.

The study, which examined prescription rates for 600 drugs in more than 2,000 counties, found sharp differences between northern and southern states, and between urban and rural counties.

The difference between states and counties reflected influences such as insurance networks and state legislation.

Western counties shared patterns in common, but split along demographic and economic lines.

The authors also found that some regions preferred more expensive drugs, even when there was no proof that they were better than cheaper equivalents.

Lead author Rachel Melamed of University of Chicago said, overall, Arizona showed the opposite pattern of many southern states.

"A place like Arizona overall has lower incidence of obesity, and they have lower rates of use of drugs for obesity–related diseases. And they have more use of disease drugs for psychiatric care and other preventive care," Melamed said.

She added that Arizona counties with higher uninsured rates and higher non-white populations spent less on health, and that people there tended to see doctors mainly for urgent needs.