NASA
NASA's Dawn spacecraft took this image of Ceres's south polar region on May 17, 2017 as a navigational aid. 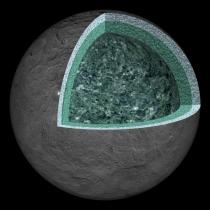 NASA
An artist's conception of the interior of Ceres, based on data from NASA's Dawn spacecraft. The mantle is likely composed of hydrated rocks such as clays. 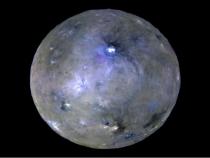 After three years, data gathered by NASA's Dawn mission to the dwarf planet Ceres still holds a few surprises. New research reveals that the largest object in the asteroid belt between Mars and Jupiter still bears the scars of an ancient rotational shift.

The study appears in the journal "Nature Geoscience."

Spinning ice skaters who hold their arms out at an angle soon feel forces pulling their limbs toward the horizontal.

Similarly, a rotating planet's tendency to minimize energy can cause it to flatten at the poles, bulge in the middle — and, sometimes, reorient its spin to adjust to density shifts, in a process called true polar wander (TPW).

TPW differs from changes in a world's magnetic poles. And unlike precession, which only changes where the Earth's axis is pointing, TPW actually causes the spin axis to change position and pass through a different set of poles, creating a new equator in the process.

Ceres retains evidence of such a shift in crustal stress fractures and a planet-circling ridge — tilted at 36 degrees relative to current rotation — that might mark its old equator.

Author Pasquale Tricarico of the Planetary Science Institute in Tucson said he was surprised at the discovery.

"You tend to make all the big discoveries right away, and then you refine the models as you keep going. But this was like, you know, kind of a big discovery lurking in the dark."

Researchers cannot say for certain what caused the mass anomaly that brought about the Ceres TPW, but a leading hypothesis holds that it was triggered by an impact around 4 billion years ago.

Scientists believe that TPW has occurred on Mars, where the massive Tharsis volcanic region might have required the planet to reorient its rotation, and on Earth, where plate tectonics have redistributed the planet's mass.

Ceres is a nearly spherical world 585 miles (940 kilometers) across. It contains large amounts of water ice and accounts for 35 percent of the main asteroid belt's total mass.

Evidence suggests that the dwarf planet is internally divided into a mantle and a crust, and that it might undergo continuing geological activity driven by ice, ammonia and salts, which have produced more than 20 known ice volcanoes on its surface.