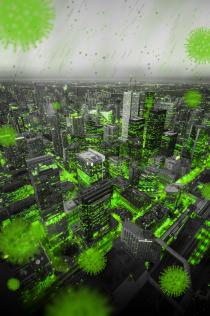 Oregon State University/Jordan Masse on Unsplashed.
The size and structure of cities can affect how influenza transmission rates respond to climatic conditions.

More than four-fifths of Americans live in urban areas, and city populations are growing faster than rural ones. Now, a new report looks at the impact urbanization could have on flu epidemics.

Influenza cases tend to follow the same general pattern: rising in autumn, peaking in winter and petering off in spring. But there's more to flu patterns than that.

"In some cities, flu cases are consistently more evenly spread out throughout the season and in other cities more cases tend to occur within a smaller window of time, "said Benjamin Dalziel, lead author of the paper in the journal Science.

Which pattern applies to a given city depends largely on population density and specific humidity, the mass of water vapor in a unit mass of moist air. Unlike relative humidity, specific humidity remains constant even as air temperature and pressure change.

But in smaller, less crowded areas that also have wider humidity fluctuations, like Atlanta, cases tend to cluster into a spike — a shorter time period when flu-spreading droplets can survive longer.

Phoenix flu epidemics tend to fall on the steady side, like other large cities that do not experience wide swings in their specific humidity.

Co-author Cecile Viboud, an epidemiologist with the National Institutes of Health, says people shouldn't get the wrong idea.

"This study does not show that some cities are safer than others for flu; rather, it shows a relative difference in the timing of cases," she said.

Viboud added that timing could have important consequences for healthcare systems. It's easy to imagine a small, rural town where annual influenza spikes overburden the capacity of a healthcare system.

The authors say they would like to apply the analysis to cities outside the U.S. and to apply it to pandemic flu as well as other pathogens.

The study data covered weekly incidence of influenza-like illnesses during a period from 2002 to 2008, based on medical claims data from more than 600 three-digit U.S. postal code areas.

Because of the much lower vaccination rate during that period, the researchers could not evaluate the impact of flu shots.