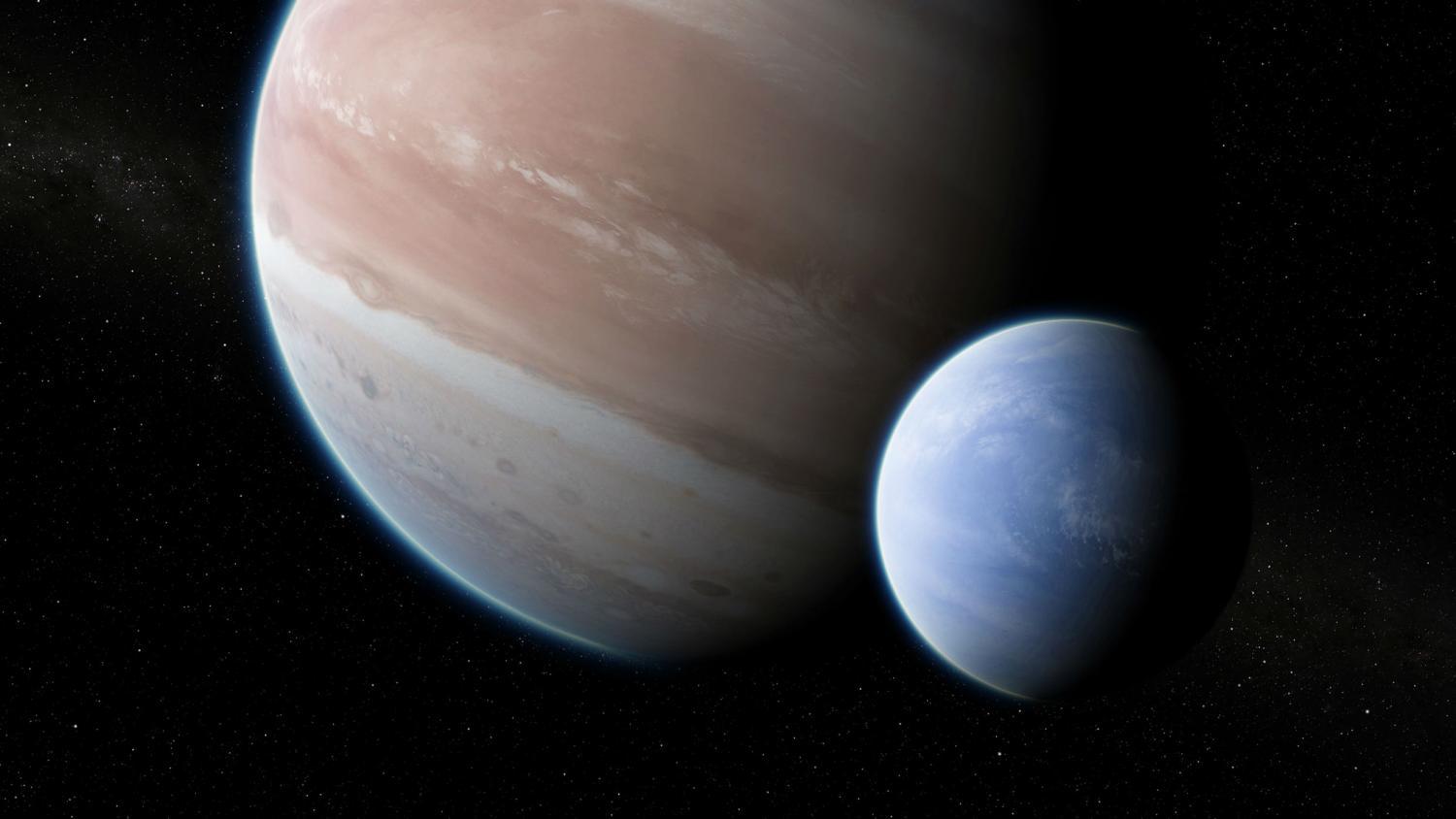 Dan Durda
Artist’s impression of the exoplanet Kepler-1625b with it’s large hypothesized moon. The pair have a similar mass and radius ratio to the Earth-Moon system but scaled up by a factor of 11.

Over the past 30 years, scientists have discovered nearly 4,000 exoplanets orbiting distant stars. Now, researchers have advanced a candidate for what could be the first known exomoon.

For co-author David M. Kipping of Columbia University in New York, it's been a long time coming.

"Over the years, we've surveyed hundreds of known exoplanets looking for moons and yet, every time, we've found nothing," he said.

Kipping and his graduate student, lead author Alex Teachey, based their hypothesis on an orbital anomaly involving the Jupiter-sized planet, Kepler-1625b, and an unusual pattern in how its star dimmed as the planet crossed it, or transited.

Both pointed to the possibility of a Neptune-sized moon.

To test their premise, the authors requested time on the Hubble Space Telescope. The Hubble observations showed that the planet's transit occurred 75 minutes earlier than predicted based on earlier transits observed by the Kepler spacecraft.

"That's a sizable shift, and it implies that there is something in the system wobbling that planet around," said Kipping.

That "something" could well be the push-pull exerted by a large, massive moon as it and 1625b orbit a common center of mass.

The second anomaly concerned changes in the star's brightness during and after the planet's transit.

Roughly 3.5 hours after the large, sharp dip caused by 1625b crossing the star, a second, smaller dimming appeared in the data. This, too, comported with the hypothesis of a Neptune-sized moon.

Kipping emphasized the need for more data and observations, preferably from instruments better able to observe faint stars for long periods of time.

"If this were confirmed, then it would be a first-of-its-kind discovery, and it's important to remember that a first-of-its kind discovery demands a much higher degree of rigor, skepticism and confidence than a run-of-the-mill detection," he said. 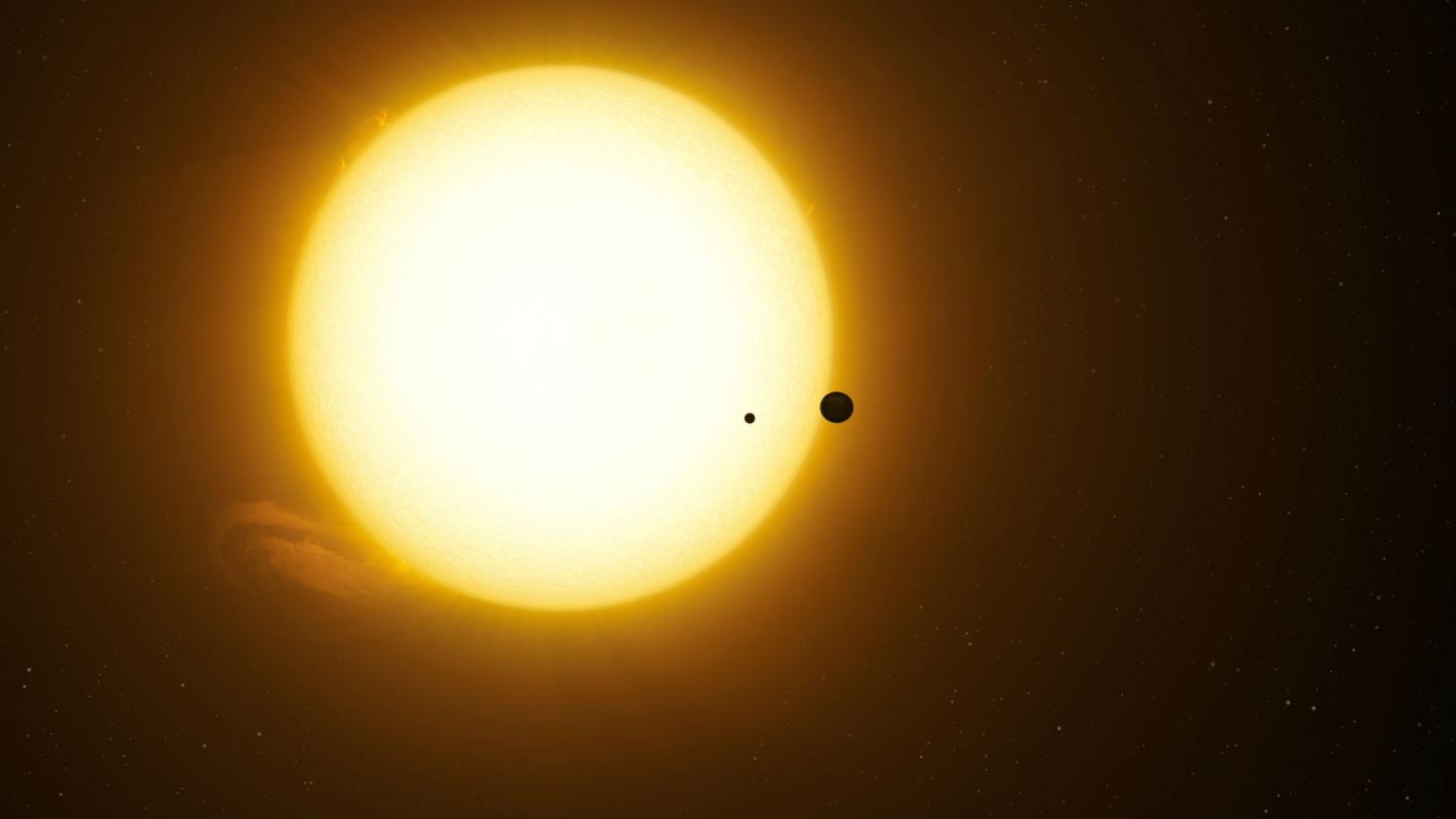 Dan Durda
Artist’s impression of the exoplanet Kepler-1625b transiting the star with the candidate exomoon in tow.

Although the researchers cannot say with certainty that an exomoon caused these effects, Kipping argues that the moon hypothesis offers the best single explanation for both anomalies.

Moreover, the proportions of the planet and moon system would fall within what current theories and models allow. In fact, in terms of mass ratios, radius ratios and separation, 1625b and its moon would resemble a scaled up-Earth-moon system.

The more scientists can observe of distant solar systems, they better they can understand how star and planet formation work.

So far, our own solar system appears atypical in many respects, but planet-hunting remains in its infancy.