From Quilts To Cakes, Arizonans Compete At The State Fair 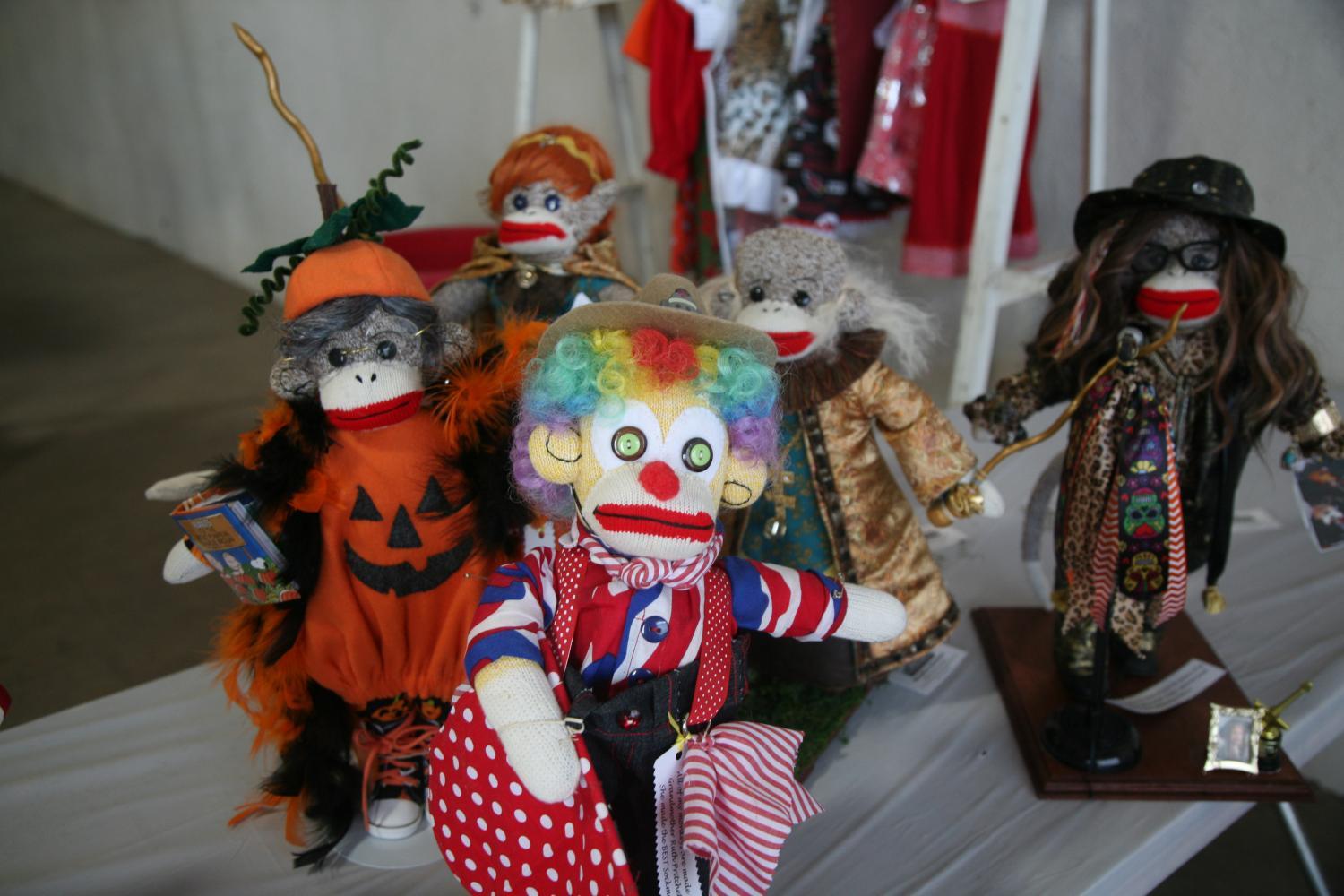 Stina Sieg/KJZZ
The state fair has all kinds of categories, and just about everything you can imagine is entered, including this sock monkey bouquet by Angela Eshelman.

Best Dollhouse. Best Pet Fashion. Best Decorative Egg. If you can imagine it, there’s probably a category for it at the Arizona State Fair.

And MaryEllen Simmons totally wants you to enter.

“You know, just imagine, you could say, in casual conversation, every chance you get: ‘Did you know that I have something in the fair? On display at the fair?” she said, excitedly.

It was a few weeks before opening day and she was standing in a cavernous exhibit hall, which becomes Simmons’ second home every October. She’s not just a decades-long employee here. She sees herself as an ambassador, always eager to bring people into the fair fold.

“I’m pumped about the fair,” she said, sporting one of the 40 shirts she’s embroidered with the fair’s logo. “I mean, I can’t think of anywhere that you couldn’t talk about the fair.”

That includes a funeral. Simmons was once asked to speak at the memorial service for a fair employee, her friend Geoffrey.

“And I thought, ‘Do I have nerve enough to do this? Yes I do,’” she said, explaining that moment before she asked the crowd, “In his honor, could you enter something in the fair?”

She got a few raised eyebrows — and several new fair participants. Simmons also runs an outreach program that ensures all of Arizona’s 15 counties are represented in the state fair’s competitive exhibits.

Norma Wade, who lives outside of Globe, helps with the program, and knows people sometimes need some convincing.

Stina Sieg/KJZZ
MaryEllen Simmons is both a longtime fair employee and probably its biggest fan. She delights in seeing everything that people bring to be judged at the fair.

“I think most of them feel like I used to: ‘My stuff isn’t good enough to put in the fair,’” she said. “But that’s really wrong.”

It was the opening day of the Gila County Fair, and Wade was standing next to a table blanketed with colorful, crocheted afghans.

Wade, who’s 76, says she never thought about entering any fair until she retired and moved to Globe a few years back. She remembers how she felt walking into this exhibit hall and seeing her work on display for the first time.

“I was amazed, amazed,” she said, “Like, ‘Oh!’ Because that first year I got a blue ribbon on everything.”

It’s the kind of recognition people of all ages are chasing.

As Hannah Weissenborn talked about her fair feelings, she was feeding bright orange fabric with zebras on it through a sewing machine in her Florence kitchen. This year, she’ll have more than 30 items in the fair, mostly vibrant pillows.

“I’m nervous and excited at the same time,” she said, “’Cause, like, you never know what’s going to happen.”

No one ever does, which is part of what makes the fair so addictive.

Stina Sieg/KJZZ
Angela Eshelman, famous for her sock monkeys, holds up her monkey rendition of Steven Tyler, one of many crafts vying for a blue ribbon.

A few days later, Simmons was welcoming a constant stream of people into the exhibit hall at the Arizona State Fairgrounds. They had garbage bags, cardboard boxes and rolling luggage, all full of work ready to be judged.

Tables were filling up with knitted shawls, cross-stitches and christening gowns. A woman’s friend helped her bring in two crocheted dinosaurs. Her dragon was still in the car.

Sure enough, she was carefully placing a family of sock monkeys onto an empty table. There was one dressed like a pumpkin, another like a rodeo clown. And there was an especially ornate monkey with long hair, leather pants and a bracelet that said “Crazy.”

“This is Steven Tyler from Aerosmith!” Eshelman said.

The fair is her favorite time of year, and not just because she’s won big before. These monkeys are a tribute to her grandmother, who made them for all her grandchildren.

“I hope she looks down from heaven and smiles,” Eshelman said.

And this year, she hopes her grandmother sees a bright blue ribbon around Steven Tyler’s neck.

The Arizona State Fair continues until Oct. 28. While it’s too late to enter this year’s competitive exhibits, MaryEllen Simmons would like you to know that there is always next year.