To say that the Arizona Cardinals were star-crossed in 2017 would be putting it mildly. 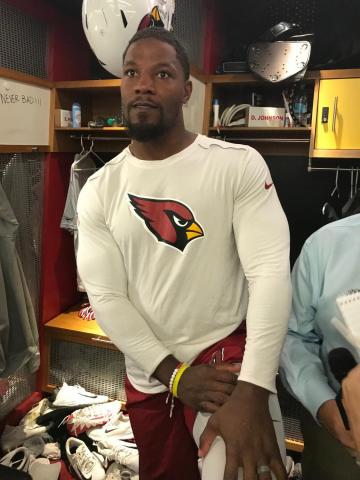 In their very first regular season game, emerging superstar running back David Johnson, who had a breakout season with 20 touchdowns in 2016, went down with a dislocated wrist that required surgery and kept him out the rest of the campaign.

A bad omen, right from the start of a season that eventually ended at a mediocre 8-8 and resulted in the retirement of both veteran head coach Bruce Arians and quarterback Carson Palmer.

So, a healthy David Johnson is the happiest sound in the Cardinals locker room right now, and he’s raring to go.

"I’m very anxious. I’ve been pumped and ready for this since the first pre-season game, I can’t wait to get the pads on Sunday and get ready to play."

But the always mirthful Johnson is aware that he may need to prove himself all over again.

"I think everyone’s got a question mark on me. They think, I guess that it’s a worse injury than it was — it was just a freak wrist injury. I’m good to go." Johnson said. "I’ve proved it. I’ve shown it throughout the pre-season. I’m good to go. Probably a lot of people have overlooked what I did in 2016."

The 26-year-old Johnson has suddenly become a veteran presence on a team that has undergone immense change since they last played a game that mattered.

Nearly half of the team’s roster has turned over since last season and there’s a whole new coaching staff, led by former Carolina Panthers defensive coordinator Steve Wilks.

"A lot of people, outside the organization — and I may be looking at some — aren’t giving us an opportunity or a chance," Wilks said during the pre-season. "But we have a lot of great talent and a lot of great coaches, and we’re gonna make some noise this year."

Back to my spirts roots covering football today at @AZCardinals camp asking new head coach Steve Wilks if the team has his identity yet. Listen for story later this week @kjzzphoenix. pic.twitter.com/TZAWJo71JI

Bruce Arians, a former quarterback, was an offensive-minded coach, while Wilks is a former defensive back who has a long track record coaching the other side of the ball. 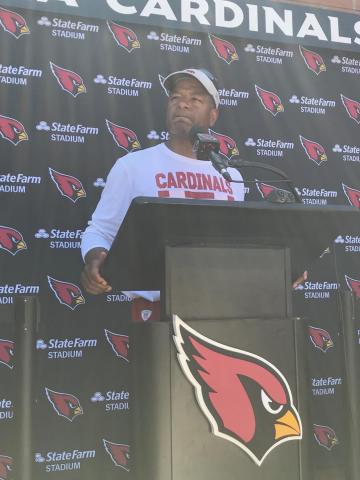 "He’s definitely a guy that’s in tune with everything on the football field as far as teams, defense, secondary, linebackers, he knows it all," Peterson said.

"And when you have a coach that listens to his players, It’s been great. So, we’re definitely looking forward to getting the season started and running through a brick wall for coach."

Quarterback Sam Bradford however, hopes to avoid any brick walls.

Signed in the off-season to replace Carson Palmer, the former Heisman Trophy winner is banking on keeping his knees healthy, specifically his left one. Injuries to it forced  him to miss the last 14 games last season with the Vikings, all of 2014 and most of 2013.

Bradford says rehab was successful, but knows his injury history.

The Cards hope steady knees will complement a steady veteran arm known for his accuracy with a 63% percent completion rate. But in case something does happen, rookie first-round pick Josh Rosen out of UCLA is waiting in the wings as the quarterback of the future. 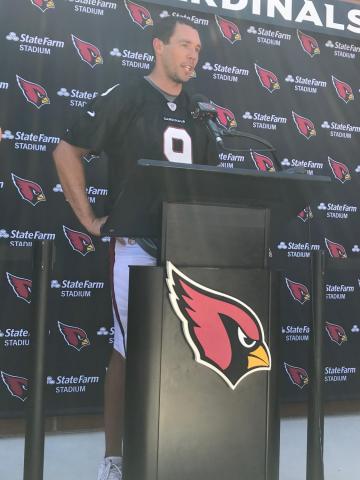 "Rookie year is just exciting, it’s like your freshman year in college. You don’t know what’s going on the next day and you’re always on your toes for anything that might happen," Rosen said. "I’ll try to get as ready as I possibly can, whether he told me I was a starter, second, third or fourth string, I’d be just as excited."

Wilks, an NFL head-coaching rookie, says he too will be pumped as he makes his debut on the sidelines Sunday against the Redskins in Glendale.

"Being one of 32 and having an opportunity to do it at home, in front of your home crowd, first game of the year," Wilks said.

But he won’t let it get in the way of doing his job.

"I’ve gotta be in tune with the game, game management, great communication with the coaches. The emotions are going to be there, but hopefully they’re very controllable."

One name we haven’t mentioned is Larry Fitzgerald’s. Despite all the upheaval, the 11-time pro bowler remains a constant in Arizona, deciding to stay on for his 15th season with the Cards by signing a one-year deal in the off-season.

At 35-years-old, the future hall of famer remains the face of the franchise and still one of the NFL’s most productive receivers as he perhaps gives it one last hurrah on a team filled with fresh faces and hopes.