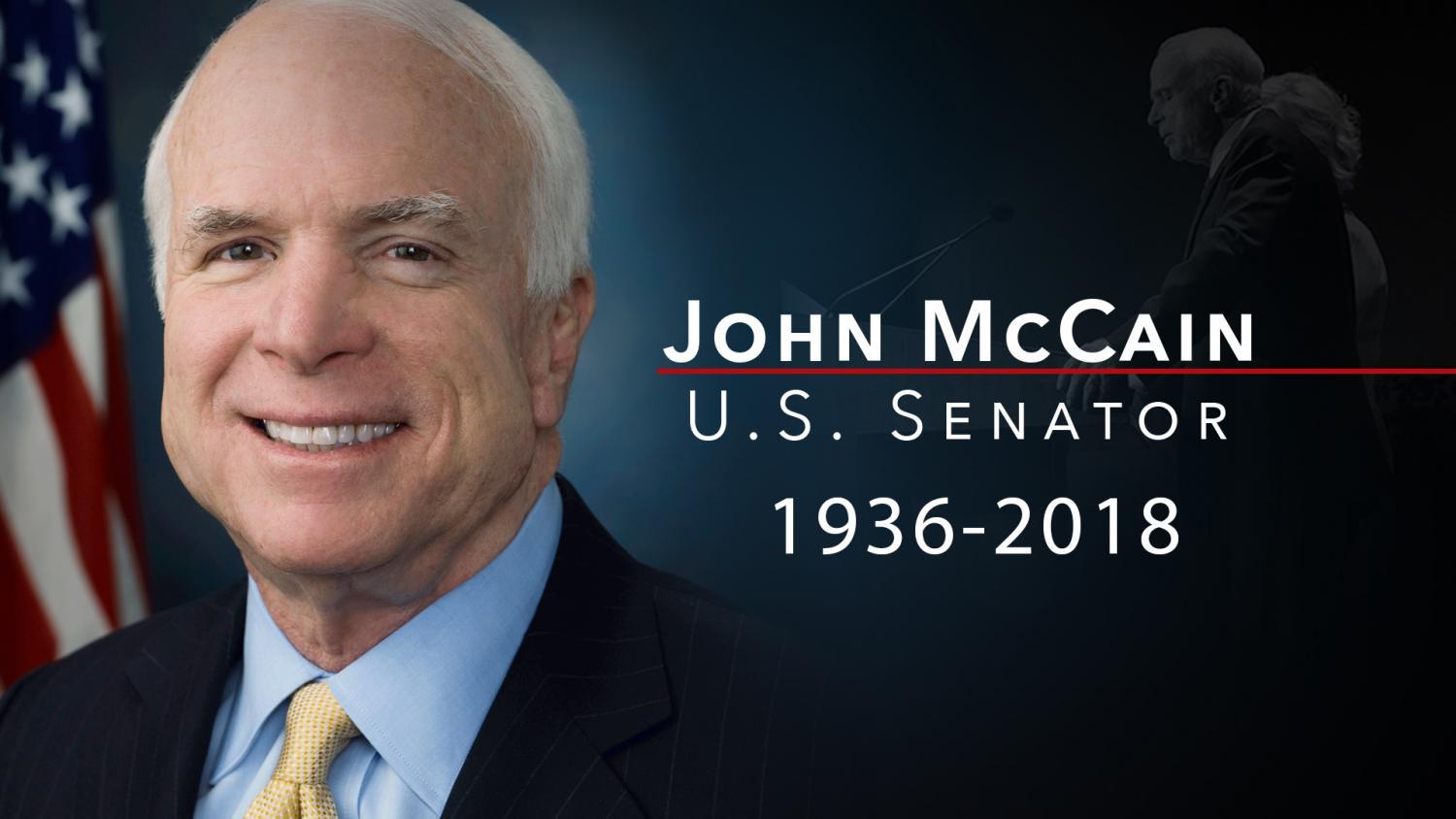 Arizona and the nation has lost one of its most towering and influential political figures. Sen. John McCain, who had been battling brain cancer for more than a year, has died at age 81.

McCain's office released a statement just after 5:15 p.m. on Saturday:

“Sen. John Sidney McCain III died at 4:28 p.m. on Aug. 25, 2018. With the senator when he passed were his wife, Cindy, and their family. At his death, he had served the United States of America faithfully for 60 years.”

He was a war hero, a statesman and an Arizona original.

John Sidney McCain III was born into a Navy family in 1936 in Panama. His father, John S. McCain, Jr. and grandfather John S. McCain Sr. were both four-star admirals. As a result, the McCain family moved around to various naval postings, eventually settling in Alexandria, Virginia where he attended high school and excelled at wrestling.

After graduating from the Naval Academy as an aviator, McCain went to Vietnam. In September of 1967, his plane was shot down in a bombing mission over Hanoi.

Shortly after the crash, he described his capture to French journalists.

“I was bombing, and I was hit by missile or anti-aircraft fire, I’m not sure which. And went straight down and broke my legs, ankles and arms.” With his voice cracking, McCain recounted, “[I] parachuted into a lake where I was picked up by some North Vietnamese”

McCain was in such grave condition, he wasn’t expected to survive a week. Instead, he would spend more than five years of his life as a prisoner of war in enemy territory, most of it in the capitol city’s main Hỏa Lò Prison. It would become known as the “Hanoi Hilton.”

Only 31 at the time of his capture, McCain was tortured and beaten in interrogations. He spent two years in solitary confinement. During his time as a prisoner, he lost 50 pounds and his hair turned prematurely white. As a result of his injuries, for the rest of his life, he was unable to raise his arms above his head.

McCain was released in March of 1973 and subsequently decorated with numerous military honors, including the Silver Star, Bronze Star and two Purple Hearts. McCain became a military liaison for the U.S. Senate with the goal of becoming a member of Congress.

He reunited with his first wife, Carol Shepp, whom he had married in 1965, and their three children. The couple divorced in 1980. After retiring from the Navy as a Captain he moved to Arizona. He met his second wife, Cindy Lou Hensley, in 1979. The two married shortly after his divorce, and McCain briefly worked at her father’s Anheuser-Busch beer distributorship. The two had three children together, later adopting a fourth.

McCain was elected the U.S. House representing Arizona in 1982. Four years later, he began what would be the first of six terms in the U.S Senate, replacing the venerable conservative icon Barry Goldwater.

In Congress, McCain quickly earned the nickname “Maverick” for his independent views and bipartisan legislation. He became a member, and later chairman, of the Senate Armed Services Committee and worked closely with Veterans Affairs as well as Native American tribes on gaming compacts. His attempts at bipartisan campaign finance reform with ex-Wisconsin Senator Russ Feingold, however, failed.

While his legacy is overwhelmingly positive, he did have his detractors — and he was embroiled in a major scandal during his time representing Arizona in the Senate.

VIDEO: Sen. John McCain In The KJZZ Newsroom In 2016

He, and former Democratic colleague Dennis DeConcini, were two of five senators — also known as the “Keating Five” — implicated in the failure of the Lincoln Savings and Loan along with founder Charles Keating at the height of the savings and loan crisis

McCain was eventually exonerated, a finding that he said he was relieved to hear after 22 months of inquiry.

“I continue to remain convinced that nothing at those meetings was improper. But that fact that four or five senators met with a regulator, was an appearance which frankly lead to all of this evolution which we have undergone.” 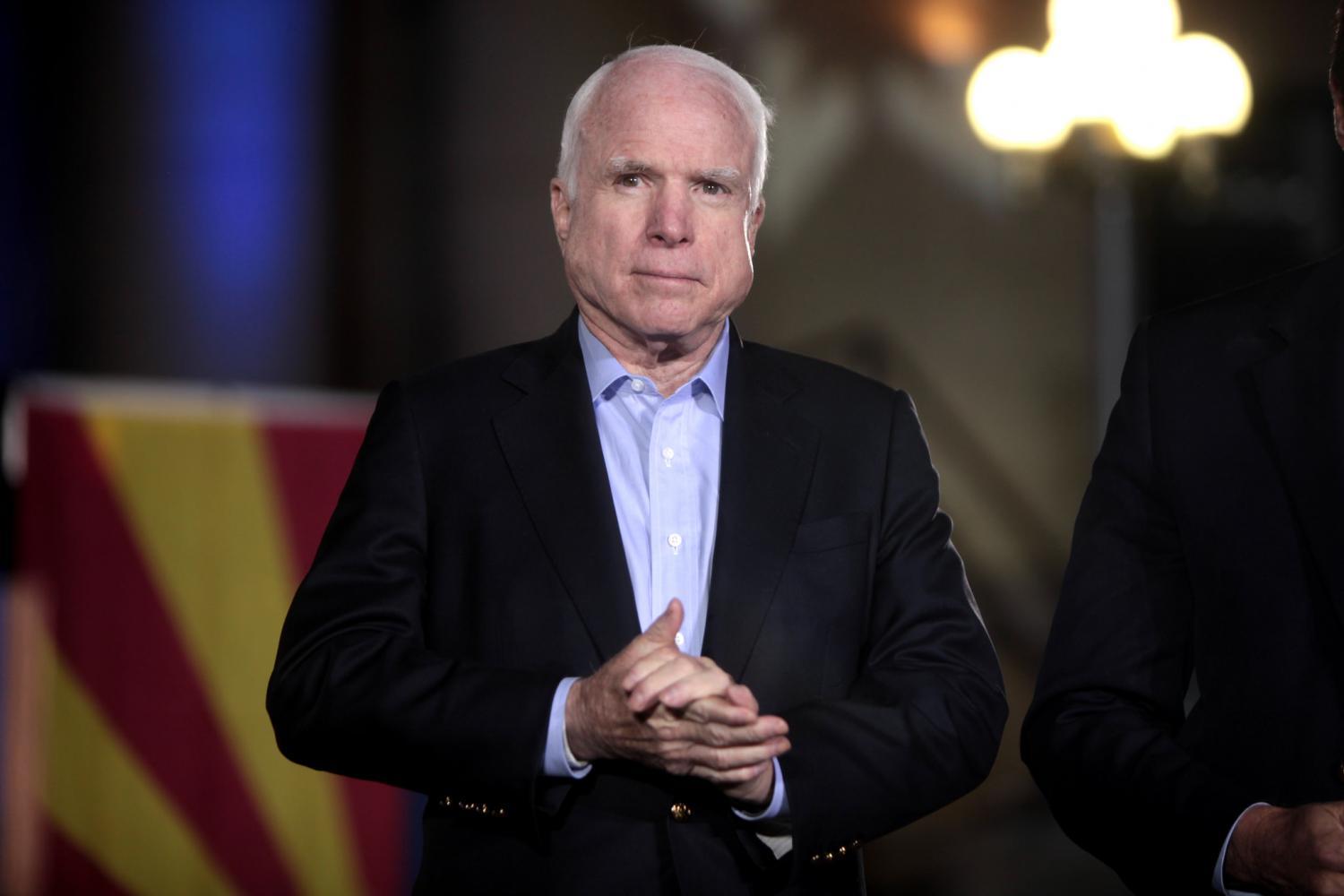 McCain ran for president twice during his political career. In 2000, his campaign bus was nicknamed “The Straight Talk Express”, and he traveled around the country holding a series of town hall style meetings. He eventually lost the Republican presidential nomination to George W. Bush. The two GOP leaders remained rivals throughout Bush’s two terms in the White House.

In 2008, McCain became the GOP standard-bearer. During the campaign and to the chagrin of many of his supporters, he famously defended his opponent, Barack Obama. At one town hall question-and-answer event, a woman told him she couldn’t trust Obama, accusing him of being “an Arab”.

McCain responded that he was a “decent family man, citizen that I just happen to have disagreements with on fundamental issues.” He heard boos when he told a campaign crowd that Obama was “a person that you do not have to be scared as president of the United States.”

After Obama was elected, McCain acknowledged the historical importance of his victory during his concession speech. “I recognize the special significance it has for African-Americans and for the special pride that must be theirs tonight,” said McCain at the time.

McCain’s later years in the U.S. Senate were marked by his strong opposition to Donald Trump. As a presidential candidate in 2015, Trump, who received medical deferments to avoid the war, criticized McCain’s service in Vietnam and remarking that he was “not a war hero” because he was captured.

McCain often condemned Trump’s policy positions and conduct. He was harshly critical of Trump’s praise of Russia’s president Vladimir Putin, whom he accused of trying to change the outcome elections in the U.S. and elsewhere.

“Does anyone doubt [Putin’s] intentions of undermining American supremacy, undermining democracy, the principles of freedom, and all of the things that have epitomized Europe and the world since the end of World War II?”

McCain, who had a history of skin cancer, had surgery to remove a growth above his left eye and subsequently was diagnosed with a glioblastoma, a lethal brain cancer, in July 2017.

Upon his return to the Senate that summer, McCain remained a thorn in the side of Trump and the Republican establishment. In an act of symbolic defiance, it was his emphatic thumbs down in the Senate that helped kill an effort by Trump and fellow Republicans to repeal and replace the Affordable Care Act.

Also in 2017, to commemorate the 50th anniversary of the Vietnam War, McCain told C-SPAN about the lessons learned from the fraught conflict that killed tens of thousands of American servicemen.

“Whether we think each other right or wrong on the issues of the day, we owe each other respect.”
— Sen. John McCain

“It was a tumultuous time.” McCain said. “One aspect of the conflict by the way that I will never ever count less was that we drafted the lowest income level of America and the highest income level found a doctor that said they had a bone spur. And that is wrong.”

Based on his experience as a POW, throughout his political career, he became an ardent opponent of torture techniques, frequently critical of U.S. administrations for employing any such practices.

In an excerpt from his final book, "The Restless Wave" released in May 2018, McCain had this last public message.

“Even in times of political turmoil such as these, we share that awesome heritage and the responsibility to embrace it.” McCain urged. “Whether we think each other right or wrong on the issues of the day, we owe each other respect.”

John S. McCain III is survived by his wife, Cindy, and his seven children.