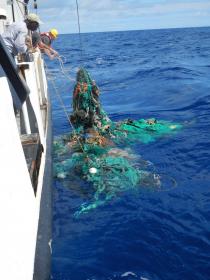 The Ocean Cleanup
Researchers retrieve a fishing net from the Pacific Ocean in 2015.

One Scientific Reports study estimates the gyre between California and Hawaii holds at least 79,000 tons of plastic, and it's only one of five or more such sites globally.

Now, the nonprofit Ocean Cleanup is preparing to launch a 2,000-foot U-shaped strainer made of floating pipes and nets to clean it up.

But some question whether that's the right place to focus efforts.

Rolsky added that the problem is so bad at this point we can't afford to get picky.

"I think that any type of creative approach to reduce the amount of plastic out there is worth looking into."