When My Generation Is In Charge: March For Our Lives Arizona On Galvanizing Young Voters Ahead Of Midterms 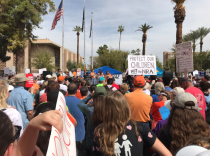 Bridget Dowd/KJZZ
The March for Our Lives rally at the Arizona Capitol in Phoenix on March 24, 2018.

Almost 80 percent of Americans ages 15 to 34 say leaders from their generation would do a better job running the country than the age group largely in power today. That’s according to a poll out Monday by the Associated Press NORC Center for Public Affairs Research and MTV.

The current Congress is among the oldest in U.S. history in terms of average age of legislators, the AP reports — and the poll results show young adults feel pessimistic about the current political environment.

Respondents said they want to vote for candidates who care about issues important to their generation, immigration being the top issue, possibly because the survey was conducted during the height of the migrant family separation crisis.

Gun policy was another top issue. Earlier this year, the same research groups released another poll, in which young adults mentioned gun policy more often than any other issue.

Meanwhile, advocacy around gun policy has been growing in that age group. It’s been more than six months since a shooter took the lives of 17 students at Marjory Stoneman Douglas High School in Parkland, Florida, launching the March for Our Lives movement.

The original march calling for tighter gun control legislation has now evolved into a national student-led movement with sister organizations all over the country, including here in Arizona. And they have now turned their focus to the 2018 midterm elections.

March For Our Lives Arizona announced recently they are organizing in every congressional district in the state ahead of the midterms, and are in the midst of a large-scale voter registration effort.

For an update on where they are and what’s next, The Show sat down with March for Our Lives Arizona Executive Director Jordan Harb.