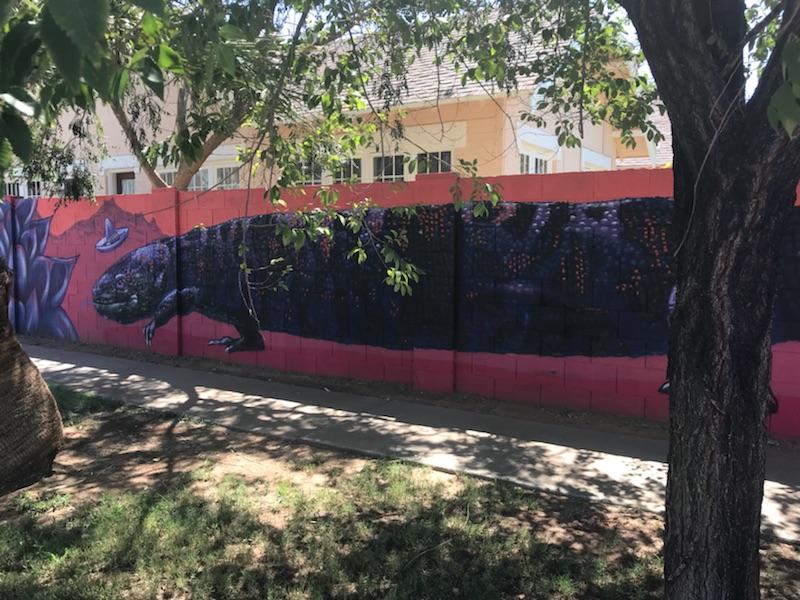 The festival organizers paired homeowners with local artists to paint murals on their front or backyard walls. Almost overnight, larger-than-life faces, flowers and more popped up in neighborhoods all around downtown.

But not everyone living in the area welcomed the fresh paint.

Some complained to neighborhood leaders, saying the style of the artwork goes against the spirit of historic preservation and some homeowners in the neighborhood would like to see a streamlined approval process, where murals are approved by a historic commission. The Show was joined by KJZZ’s Paige Phelps, who went out and took a look at a couple of these murals herself.

Fairview Neighborhood resident Beth Malapanes talked about her front wall where there are now three painted tortoises, much to the curiosity of passing traffic. The color palate matches Malapanes’ home, yellows, browns, hints of greens, with little desert flowers. She says she’s only heard good things about her mural.

Now, there are much more colorful murals in the neighborhood.

Just across the street from her, for example, you can see that visible alley walls are painted in abstract, spacey, cartoon-like shapes and figures. And then there’s a wall in F.Q. Story, a nearby neighborhood, that has drawn ire.

It’s as large as a house and features a giant, purple Gila monster with a tiny floating sombrero over its head surrounded by a hot pink background and purple agave.

We asked Malapanes to further explain why she doesn’t agree with the idea that all homeowner art, visible to the street, should have to go through a historic review process.

Ginger Mattox has lived in the F.Q. Story neighborhood for more than three decades. She’s also with the Phoenix Historic Neighborhood Coalition. She made it clear that the coalition has yet to form an official opinion on the matter. But she says, after this year’s Phoenix Mural Fest, she heard from some neighbors saying they’re unhappy with the new art in town.

The Phoenix City Council will hold a public meeting on murals in historic neighborhoods August 21.