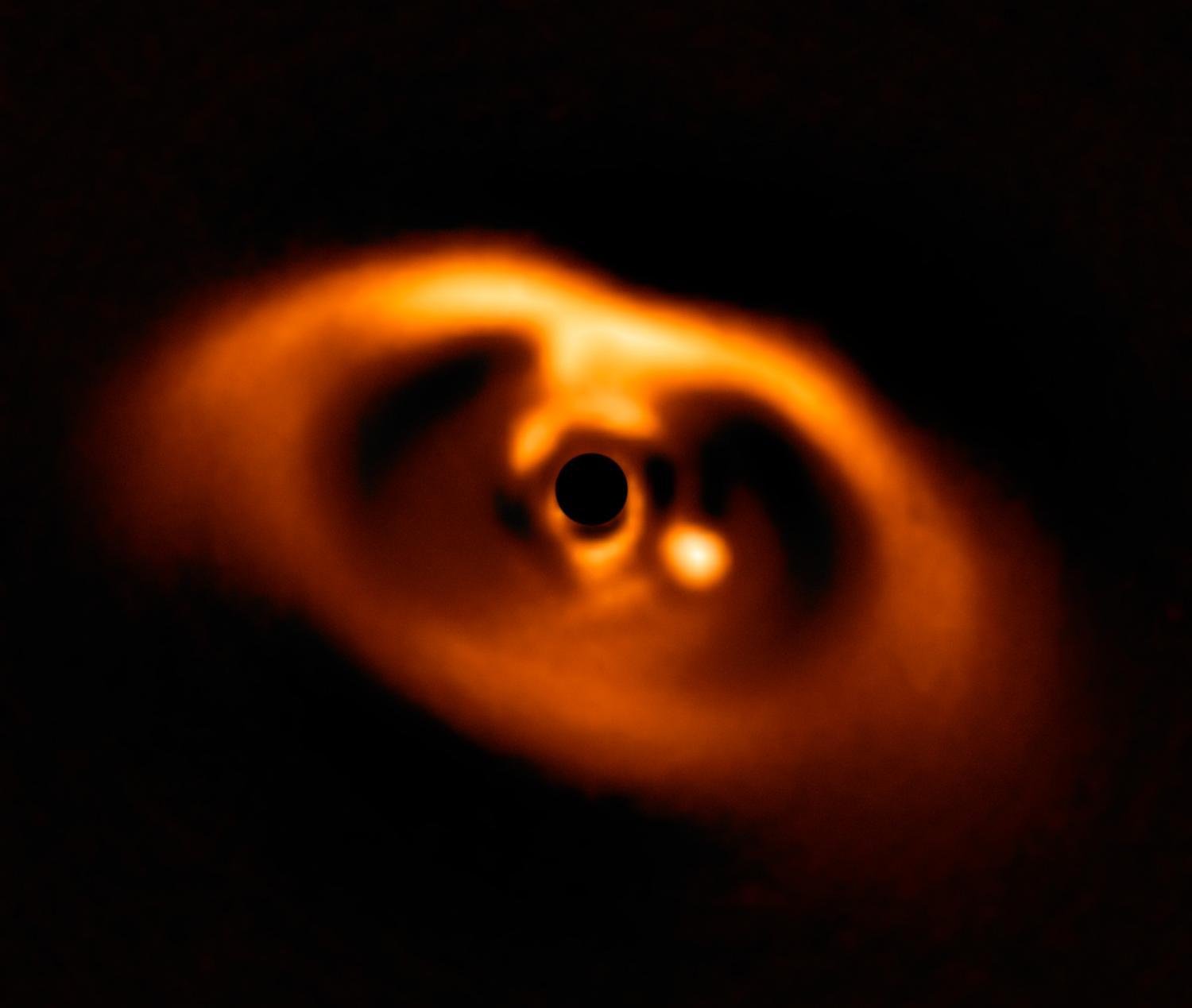 ESO/A. Müller et al. (www.eso.org)
Planet PDS 70b (bright point to the right of center) captured in the act of formation around its dwarf star, which is masked out to block its light.

More than two decades after the discovery of the first planet outside of Earth's solar system, scientists have captured the first confirmed image of a newborn world.

The international team, led by the Max Planck Institute for Astronomy in Germany, published its findings in the journal Astronomy & Astrophysics. The papers are available on the Max Planck website here and here.

PDS 70b is a hot, massive, gas giant measuring 2-15 times the mass of our own solar system's largest planet, Jupiter.

The nascent planet circles its star at roughly the same distance as Uranus orbits Earth's sun: around 20 astronomical units (1.8 billion miles). It plows a clearing through the dusty transition disk surrounding its star, PDS 70, a dwarf star of 0.5-0.7 solar masses located around 60 parsecs (1.15 quadrillion miles) from Earth in the constellation Centaurus.

A transition disk marks a solar system in progress, a period during which much, but not all, of the gas and dust of the early solar system has disappeared, leaving gaps behind. Those gaps can be caused by a blast of solar wind, a passing planet sweeping the area clear — or by planets forming.

PDS 70b could help answer many outstanding questions regarding how planets and solar systems develop.

University of Arizona astrophysicist Paula Pinilla, who contributed to the study in the Proceedings of the National Academy of Sciences, calls the cool, long-living star an "excellent laboratory."

"We are capturing the planet in the stage of formation. This is very important because, even though we have observed thousands of exoplanets, this is the very first one in this stage that we've observed."

Pinilla says the new method, which tracked the planet over six years across multiple wavelengths, proved more definitive than earlier contenders. Some scientists have since challenged those detections because the techniques used could not distinguish possible planets from features in the disk.

"We observed it in different wavelength and it was visible in each of them. Plus, we have observations that go six years in total, and we can see that it was a bound object to the star. And we could start actually to see what the orbital motion of that object is, and see that it actually follows how a planet should move around the star."

A Native American archeologist on how her field can shed light on the history of people of color.