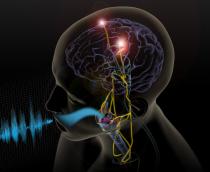 Now, scientists at University of California, San Francisco believe they have found the brain area that makes this possible: the dorsal laryngeal motor cortex (dLMC), a subsection of the brain's larynx control.

"This area is active not only when you're speaking but also when you're listening. And, in both cases, it looks like it's representing vocal pitch," said lead author Ben Dichter.

The study appears in the June 28 edition of the journal Cell.

Although some birds, marine mammals, bats and elephants can flexibly control pitch, humans remain the only primates with this capability. Scientists increasingly believe home sapiens achieved language not only by evolving a sophisticated larynx, or voice box, but also by developing the neurological capacity to use it in a variety of ways.

And use it we do. Shifting pitch can make two identical written sentences have different spoken meanings.

It can convey mood and emphasis, and change a statement into a question. In some tonal languages, like Mandarin Chinese, identical words change meaning based on inflection and pitch alone.

Much of that capacity resides in the laryngeal motor cortex, which controls the larynx. But, prior to this study, the specific subarea where the brain encodes and represents pitch remained unclear.

To find it, Dichter and other UCSF researchers recorded activity in the cerebral cortex of epilepsy patients using electrocorticography (ECoG), which monitors the brain via electrodes placed directly on its surface.

The patients, who had already had the electrodes implanted to monitor their epilepsy, volunteered to participate in the research.

"When we looked at the pitch of the voice, and we could simultaneously look at the neural activity that we recorded from the electrodes, we can see that there was a part of the brain that was more active when these volunteers were emphasizing a word," said Dichter.

The team found the dLMC encodes pitch both in terms of how humans vary vocalizations and how they interpret pitch shifts when heard, whether spoken or sung.