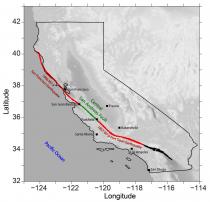 (M. Khoshmanesh/ASU)
The central buffer zone of the San Andreas Fault (green) is flanked by locked sections (red) that release energy via earthquakes.
(M. Khoshmanesh/ASU)
Synthetic aperture radar data for 2003 to 2010 let the team map the average rate of movement for the ground flanking the central section of the San Andreas Fault (black line). Red shows ground movement toward the southeast, and blue to the northwest.

Earthquake forecasts consider the fault's 90-mile middle section from Parkfield to San Juan Bautista to be a stress-relief zone, where steady sliding, or "creep," relieves seismic energy and acts as buffer between the north and south sections.

But satellite research published in Nature Geoscience suggests the Central Fault actually repeatedly gets stuck, then slips, in a series of undetected "slow" earthquakes.

"On that part of the fault, the creep is not continuously occurring and instead we have these episodes of slow earthquake that occur every one or two years and they last for a couple of months," said Arizona State University doctoral student Mostafa Khoshmanesh, lead author on the study.

These quakes could put more stress on neighboring segments to the north and south, which are locked and generally release their energy through earthquakes.