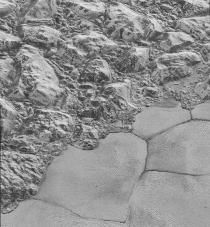 (NASA/ Johns Hopkins University Applied Physics Laboratory/ Southwest Research Institute)
This image taken during the New Horizons mission shows the mountain range on the edge of the Sputnik Planitia ice plain, with dune formations clearly visible in the bottom half of the picture (click to enlarge).

Scientists analyzing Pluto data from the New Horizons spacecraft believe they have, for the first time, found dunes made of frozen methane.

"When we saw those, we were like, 'Wow, that totally looks like North Africa and the Sahara Desert,' said co-author Will Grundy of Lowell Observatory in Flagstaff, who leads the New Horizons Surface Composition Science team.

But pressure 100,000 times lower than Earth's requires some additional force to first boost the particles into the air.

The lead authors of the paper, which appeared in the June 1 issue of the journal Science, believe nitrogen ice turning to gas in the afternoon sun could provide that uplift.

That nitrogen arises from nearby Sputnik Planitia, the ice-covered basin that makes up the western lobe of the Pluto's signature heart-shaped region, Tombaugh Regio.

The oomph put out by nitrogen crystals sublimating might sound like little more than a puff, but it doesn't take much to start a process that snowballs.

"Once they're moving in the wind, it's kind of a self-perpetuating thing. Because each time one does a sort of little hop, hits the ground, it maybe mobilizes a bunch more. They call it the 'splash effect,'" said Grundy.

Other explanations are possible, of course. But Grundy said the hypothesis has gotten the scientific community thinking.

Other dune types have been found on Mars, Venus, Saturn's moon Titan and Comet 67P/Churyumov–Gerasimenko.