Forensic Science Education At ASU: A Peek Behind The Police Tape 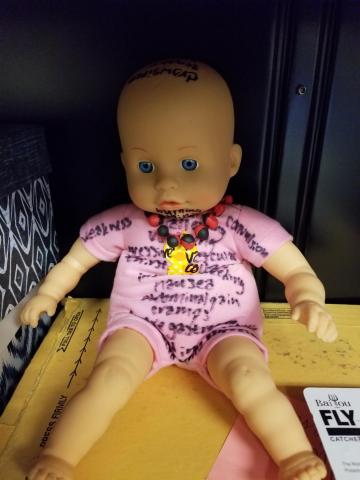 Nicholas Gerbis/KJZZ
This doll lists all of the symptoms of abrin, the toxin of the rosary pea (Abrus precatorius) seed. The red and black beans are often made into jewelry like the doll's necklace.

Every great investigator tells a story about the one that got away.

"I had this case, and it has always haunted me — I want to know what the heck happened," said Kimberly Kobojek, director of the forensic science program at Arizona State University's West campus.

For Kobojek, formerly of the Phoenix Police Crime Lab, that white whale was a reddish brown stain.

"I would have bet my house that this is blood. Tested it; it's not indicating blood. It's a car door, so I take this car door apart — inside, out — and nothing tested positive for blood. We didn't get any DNA off of it. And I thought, 'What the heck did this person clean with?' That's kind of been in my brain."

She turned that vexing mystery into a semester-long class project studying how drugs and alcohol affect blood stain characteristics like viscosity. Such qualities affect how experts interpret stain patterns.

Outside of class projects, students can pursue independent studies.

For her honors thesis, Mandy Kephart researched the efficacy of looking for fingerprints or DNA on spent cartridge casings. She concluded that the rare cases in which this might work could not justify the time and expense involved, and that it was best to send casing straight to ballistics.

The FBI has since offered her a summer job, pending the usual security check.

"I've been volunteering at a lab since I was a freshman, and I've been shadowing experts and doing online trainings and stuff to get me ready for that," said Kephart.

The program also encourages students to seek out internships and other real-world experiences. McKenna Byrne interns at the Maricopa County Medical Examiner's office.

"On Mondays, I go out with investigations. I take pictures, I help get information, I subpoena records, stuff like that. Starting next Thursday, I'm going to be starting with exams, so I'll be undressing bodies and helping in autopsies — 'helping,' like, very, very loosely using that word."

Like some of her instructors, Byrne came to forensic science in a roundabout way.

"I wanted to be a surgeon for a really long time, and then I realized you have to deal with live people. So I was like, 'Nope, never mind.'"

Some projects take place in labs around campus, but many play out in the basement crime scene lab nicknamed "the dungeon."

This entails more than just crime scene analysis with training wheels: It's a chance to make mistakes while the stakes are low.

In one case, a seemingly accidental trip-and-falls scenario included a clue to something more sinister. 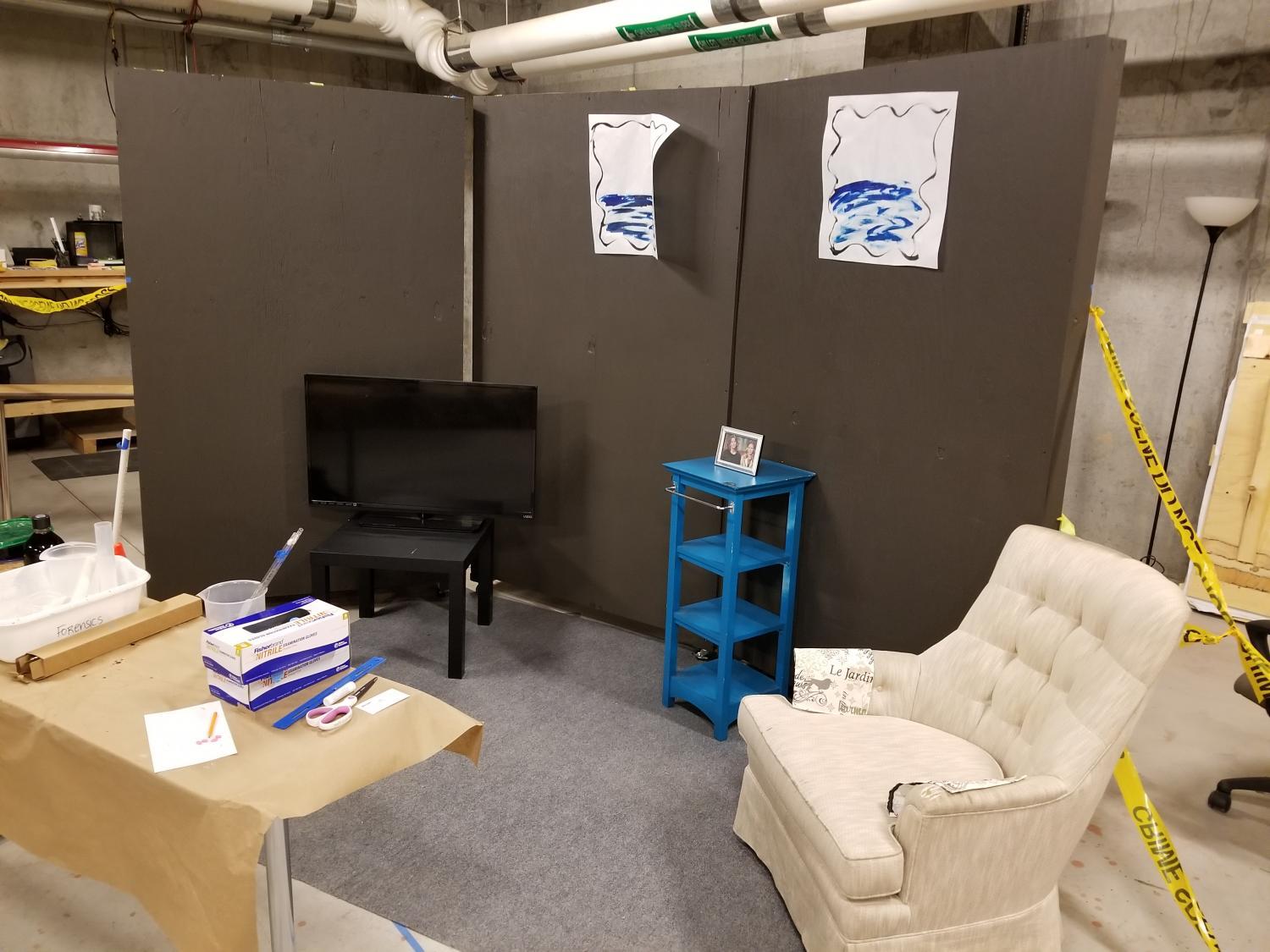 Nicholas Gerbis/KJZZ
One of a half-dozen mock crime scenes where students hone their skills.

"In addition to the victim being on the floor, there was a glass that had some shady-looking material in it. So, maybe they should be sending that off to toxicology," said Kobojek.

The crime lab consists of a sizeable storeroom containing half a dozen mockup rooms built from moveable flats and castoff furniture. Blood spatter, fake corpses — and a bit of gallows humor where the names are concerned — round out the experience.

"I will use, usually, groups of some of my favorite TV shows, like 'Buffy the Vampire Slayer' or 'Gilligan's Island,' for victims' names. And I'll give them backstories, but somehow they're all interconnected," said Kobojek.

In a way, such random associations hint at an underlying fact of forensic science: You never know what knowledge will prove useful.

"Our forensic science students have to know a little bit about everything, which is what I think is so attractive."

In describing his job, Falsetti says he "identifies the unidentified," typically via skeletal remains.

"We tend to testify to things [like] either how long someone was dead — because that usually goes to an alibi — or, what were the mechanisms of injury."

Prior to joining ASU, Falsetti excavated and recovered individuals from the Bosnian conflict of the early 1990s. To identify the remains, he relied on familial DNA — genetic reference material from living family members. Such approaches are not unlike the methods that recently made news in the Golden State Killer case.

"It's identification through this process of family, so it can be, you know, parents, siblings," said Falsetti.

The requirements and disciplines that participate in forensic science vary widely. Forensic anthropologists need a doctorate; medical examiners and pathologists require medical degrees; both require board certifications. Coroners are elected or appointed political positions. Some of the many other forensic fields are friendlier to entry-level degrees.

“That's sort of the beauty of forensic science. It's not any one science ... Any science can be a forensic science if it's applicable to the law.”
— Anthony Falsetti, ASU forensic anthropologist

"That's sort of the beauty of forensic science. It's not any one science, although we tend to weigh sort of heavily on biology and chemistry. Any science can be a forensic science if it's applicable to the law," said Falsetti.

So what makes for a successful forensic scientist? Kobojek said the best students share an ability to "think independently while still following rules and protocols."

KJZZ is licensed to the Maricopa County Community College District.