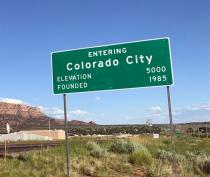 Sarah Ventre/KJZZ
Colorado City is on the Utah-Arizona border.

The towns of Colorado City, Arizona, and Hildale, Utah, announced Thursday that a new police chief was hired for the Colorado City Marshal's Office.

Chief Mark Askerlund will serve as the head of the police force that serves both towns, which are known for being the home of the Fundamentalist Church of Jesus Christ of Latter Day Saints.

It's been known for some time that the new hire would be from outside the community. Chief Mark Askerlund worked in a number of police departments in Salt Lake City and Cottonwood Heights, Utah. Askerlund has said he wants to bring unity to the community.

Askerlund is taking over the vacant position previously held by Jerry Darger, who was fired in March. The replacement comes at a time when some residents, including one candidate for Hildale City Councilor, have indicated distrust of the small police force.

The Marshal's Office was also a named defendant in the Department of Justice lawsuit against the towns in 2016.