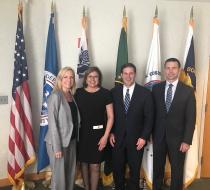 Speaking in a familiar tone on the issue of greater border security, President Trump promised change. “We have the worst immigration in the entire world," he said. "There is nobody close. And it could be changed so easily. And we’re going to get it changed.”

Ducey said he was pleased with the president’s remarks and also a recent trip to Arizona by Secretary of Homeland Security Kirstjen Nielsen. “Secretary Nielsen was able to see how wide open and unprotected our border is in southern Arizona and the flow of not only illegal drugs, but human trafficking,” Ducey said.

Ducey will travel on to Atlanta for a meeting with the NFL on Wednesday, when Glendale is expected to be named host of Super Bowl LVII.