For Phoenix Mercury, This Season As Much About Babies As Basketball 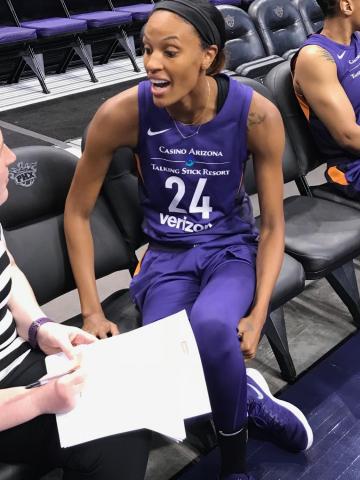 Phil Latzman/KJZZ
Phoenix Mercury forward DeWanna Bonner talks about returning to basketball after taking the year off while giving birth to twin girls.

While their NBA brothers, the Phoenix Suns, finished with the league's worst record, hopes remain high for the Phoenix Mercury, who are still a force to reckoned with in the Women’s National Basketball Association.

Bonner has spent the past year not thinking too much about basketball.

“I’m very tired, every day — but I think I’m getting used to it. Now it’s been nine months — so I’m kind of used to getting no sleep. But I wouldn’t change it for the world," said Bonner.

She returns to the Mercury after taking 2017 season off to care for them, and now it’s back to work.

While not having to endure the rigours of pregnancy, labor and recovery, Taurasi is also a new mother. The soon-to-be 36-year-old WNBA legend enters her 14th season. Her wife — former Mercury forward and current director of player development Penny Taylor — gave birth to their first child, son Leo, earlier this year.

The pics you've all been waiting for: Olympic baby Leo!

“It gives me a greater appreciation of what mothers have to do, cause it’s double-time. No one’s doing the stuff that we have to do and still pursue a career. It’s an amazing thing and not a lot of people can do it — especially not me,” Taurasi said.

In fact, there are so many new babies around the Mercury that they recently opened a nursery at Talking Stick Arena.

“To my knowledge, we are the first in the league to have a full-time nursery. We have a pediatric nurse as our nanny,” said Jim Pitman the team’s executive vice president. “We’re trying to make sure we’re provided the things that make our athletes successful.”

The full-time nursery may be new, but women athletes in the WNBA having children is not.

Meyers, a groundbreaking former player and member of the Basketball Hall of Fame, said many new mothers can even benefit from the absence.

“It’s been proven that women actually perform better after childbirth, whether it’s basketball or volleyball or soccer or tennis or golf, whatever the sport,” Meyers said.

Mercury head coach Sandy Brondello is also a former player with children to take care of. 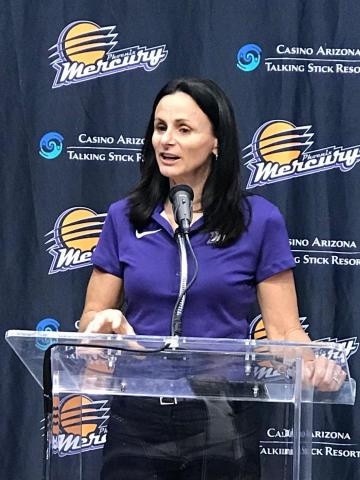 “We’re women. It’s great that you can have children and still comeback and play because that’s what we do!” Brondello said.

Brondello said there are other hidden benefits to motherhood — though sleep isn’t one of them.

“It shows that you can have balance in your life. I never played after having children, so I think that’s much harder.  Because there’s a lack of sleep. All us mothers in the room, we just lack sleep. But we get used to it," said Brondello.

Taurasi said being a mom to a newborn has given her a new appreciation for the game of life and basketball.

“It really is a full-time job. You have to be there. You have to have that care and love,” said Taurasi. “It’s been an amazing experience. It’s really made me appreciate my friends and family and my parents a lot more. Here with the Mercury, it’s a different vibe this year. There’s a lot invested in a lot of things.”

Bonner, who also help from her family and nannies, said she’s as excited to be reunited with her teammates as they are to have one of their best players back in the lineup.

“It was bittersweet kind of thing. In nine months, I knew I was gonna have these beautiful babies. But then again,  I’m like my teammates are struggling a little bit, I wish I could help — I wish I could be there to play," Bonner said.

And now she will — as a full-time mother and a full time basketball player.

It’s been said of Fred Astaire and Ginger Rogers that Rogers had the far harder job, having to dance backwards and with heels on during their famous cinematic routines.

Just replace the high heels with high tops as they back-peddle and hit the backboards on the basketball court.