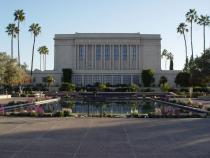 midiman/CC BY 2.0
The Mormon Temple in Mesa.

The Mormon Temple in downtown Mesa, built in 1927, is the oldest in Arizona. And now, the church has announced that it will be closed for two years starting this month for renovations.

But part of their plans for redevelopment are raising concerns.

Not all of the details have been revealed, but the redevelopment of the temple will include the demolition of as many as eight historic homes that the church owns in the area, which has got some historic preservationists concerned.

This is happening beside all the other developments that are about to happen in downtown Mesa, making this an interesting time for the city.

For more on this, The Show sat down with Lily Altavena who’s covering it for the Arizona Republic.