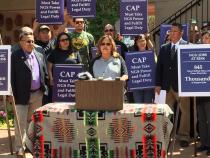 Tom Maxedon/KJZZ
Marie Justice, president of the United Mine Workers Local 1924, speaks in the courtyard of the Inter Tribal Council of Arizona in Phoenix. 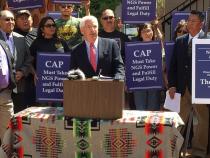 An expected announcement on the sale of the Navajo Generating Station (NGS) took an unexpected turn Tuesday morning.

Hoping to save more than 800 jobs in Arizona, representatives from the Hopi Tribe and the United Mine Workers of America announced they have filed a lawsuit asking the U.S. District Court for the District of Arizona to compel the Central Arizona Water Conservation District (CAWCD), to continue purchasing power from the NGS per a 1968 act of Congress.

Speaking in the courtyard at the Inter Tribal Council of Arizona, Marie Justice, president of the United Mine Workers Local 1924 which represents miners working in the Kayenta mine that supplies coal to the NGS, said, “We often quantify the economic benefits of the Navajo Generating Station only in dollars and cents. Tribal families clearly have the most to lose if the plant is forced to shut down decades before Congress intended.”

Former U.S. representative for Arizona John Shadegg, who is with the law firm working with the Hopi Tribe and United Mine Workers, said the suit centers on forcing the CAWCD to abide by existing federal law.

“What they are saying is that they no longer want to honor the deal because they want to get a better deal. This lawsuit is intended to tell them that they are wrong,” he said.

Shadegg said CAWCD's decision to walk away from the deal struck with Congress would allow the state entity charged with operating the Central Arizona Project (CAP) to welch on repaying more than $1.1 billion owed to the federal government.

Moreover, Shadegg said, "the Hopi and Navajo were told the plant and mine would operate and provide economic benefits through 2044."

The announcement of the lawsuit was news to the CAP, which runs the pumps at NGS.

CAP issued the following statement in response to the suit following the press conference:

"CAP is a public entity with a responsibility to deliver a reliable water supply at the lowest reasonable cost. After the announcement that NGS would be closing, CAP’s Board of Directors began diligently leading a transparent RFP process to replace the energy from NGS. During this process, the board heard from members of the Hopi tribe who want coal mining to continue and others impacted by the closure of NGS. We recognize and respect the perspectives of those who, like CAP, are also impacted by the decision to close NGS. The CAP Board took several actions to delay the process to allow for other opportunities to emerge. Further delays could threaten the organization’s ability to meet our responsibilities. If NGS remains open under new ownership, there is room in the CAP portfolio, including both short-term and longer-term opportunities, for CAP to purchase cost-competitive NGS power. In the meantime, the CAP Board is doing what it must do to responsibly meet its future water delivery commitments."