Finding An Alien World Half A Mile Beneath Canadian Ice 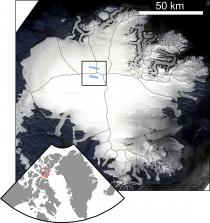 (Figure by Anja Rutishauser)
The location of the subglacial lakes and of Devon Island.

(Photo by Anja Rutishauser)
A research scientist from the University of Texas Institute for Geophysics operating the radar instruments inside a DC-3 aircraft during a survey flight over Devon Ice Cap.

(Photo by Anja Rutishauser)
A cold and windy spring night on the vast landscape of Devon Ice Cap where two subglacial lakes are lurking thousands of feet below the surface. 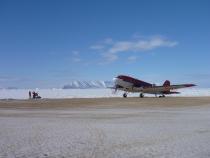 (Photo by Tom Richter)
The DC-3 aircraft stationed on the Quaanaaq airfield in Greenland, minutes before conducting an aerogeophysical survey over Canadian Arctic ice caps. The radar antennae (red) are mounted beneath the wings of the aircraft.

An international team of researchers has reported what may be the first two isolated, salty, subglacial lakes found on Earth.

The water pockets — one roughly the area of Arizona's Saguaro Lake, the other about four-fifths the size of Apache Lake — differ from 400 other subglacial pools in that they are 4-5 times as salty as Earth's oceans.

Researchers believe the lakes, which lie 560 and 740 meters (1,800 and 2,400 feet) below the surface of the Devon Ice Cap on Eastern Devon Island in Nunavut, Canada, derive their brininess from an intruding layer of halite, or rock salt.

"It needs to be about 4-5 times the salinity of seawater to sustain liquid at those cold temperatures of around -10 to -12 degrees Celsius [10 to 14 degrees Fahrenheit]," said lead author Anja Rutishauser, a doctoral student at the University of Alberta.

The study appeared in the April 13 edition of Science Advances.

Based on samples taken from other subglacial water bodies, Rutishauser and her colleagues believe the lakes could support microbial ecosystems. If so, the microbes would have evolved in isolation for at least 120,000 years.

"Subglacial and aquatic systems, and the direct sampling of subglacial lakes, have actually shown that such systems can host active microbial life, despite their isolation from the atmosphere and their extreme dark and cold conditions."

Such ecologies could help scientists grasp what kinds of life and living conditions might exist on other worlds.

"Exploring the subglacial lakes on Devon Ice Cap could help us better understand what are the possibilities and limitations of life in such extreme environments on Earth, but also on other planetary bodies like Europa," Rutishauser said.

Data suggests that Jupiter's icy moon contains hypersaline lakes of liquid water within its global ice shell, which itself covers a moon-spanning ocean.

Rutishauser discovered the lakes, much to her surprise, while analyzing airborne radar-echo sounding data, sometimes called "ice-penetrating radar," which takes advantage of ice's transparency to normal radar to let researchers peek beneath its surface.

The boundary where ice meets water within the ice cap reflects radar signals much more strongly than the margin between rock and ice.

NASA's Europa Clipper mission will use the same technology when it launches next decade.

The researcher said they do not yet know how the lakes formed, or how they might interact with shallow or deep groundwater flows.

Perhaps ice at the base of the sheet melted when it met the layer of rock salt; or possibly water bodies began under the open sky, accumulated salt from the halite layer and were later iced-over by advancing glaciers.

Additional planned research, modelling and surveys will help fill in these gaps, and prepare researchers to ultimately drill down and access the lakes.

A key part of planning will include finding ways to access the pristine environments without contaminating the environment or the sample — key concerns for NASA, too, as it considers missions that may one day dip into extraterrestrial seas.