Hopes High For Arizona Diamondbacks As 20th Season Kicks Off

They lost that opener in Phoenix to the Colorado Rockies on March 31, 1998. But success would come rapidly for the young Diamondbacks, who in 1999 won a division title and 100 games in their second year of competition. Two years later in an epic seven-gamer against the New York Yankees, they became the quickest expansion team to ever win a World Series.

Last year, following a five-year absence from the postseason, they returned to that past glory, making a 24-game improvement, winning 93 games and the National League Wild Card in a dramatic playoff game with Colorado, before being swept by the Dodgers in the Division Series.

Now, hopes are even higher.

Relief pitcher Archie Bradley may be the face of the franchise — his unbridled enthusiasm, unmistakable full red beard and bullpen clutch performances have made him a fan favorite. 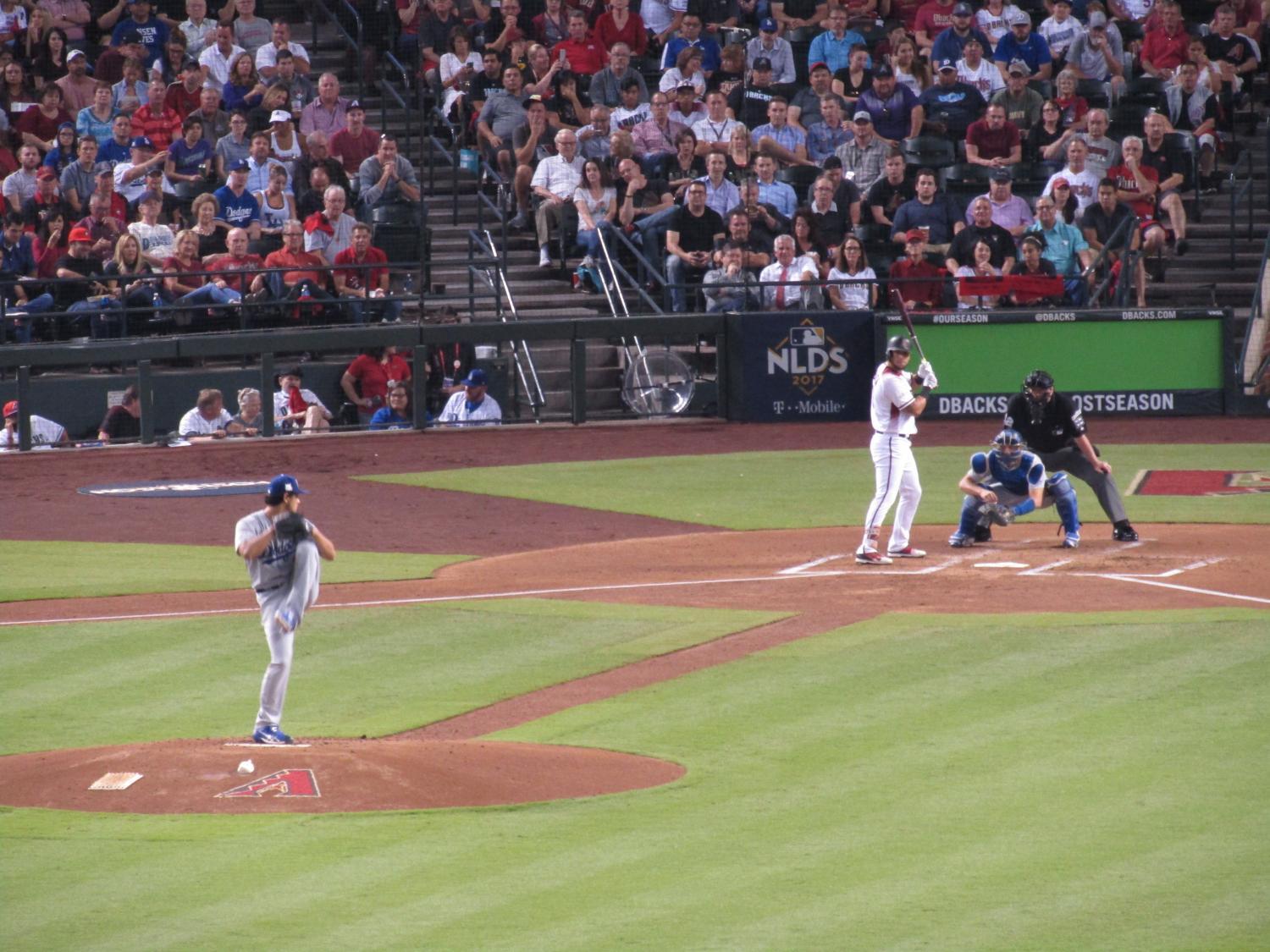 Casey Kuhn/KJZZ
Dodgers pitcher Yu Darvish helped sweep the Diamondbacks in Game 3 of the NLDS in 2017.

“It definitely can be topped, but I’m not gonna say it will be. That’s the thing I’ve learned over my last few years. Every year is a question mark. We’ll take it day by day, but for the most part, it’s the same team, it’s the same group leading us up top, and we’re a year older and a year more mature, a lot smarter and ready to go," said Bradley.

“A majority of the team kept in contact, and we carried in to spring kind of where we left off last year, you know ... ” he said.

Bradley will back up a starting five pitching rotation that will be strength of the ballclub, led by all-stars Zack Greinke and Robbie Ray.

“To return five pitchers healthy, feeling good and the relationships that we developed with each other — both on and off the field — is just going to bring us closer together,” he said.

“To return five pitchers healthy, feeling good and the relationships that we developed with each other — both on and off the field — is just going to bring us closer together.”
— Archie Bradley

The big question mark this season will be the Diamondbacks bats.

Slugger J.D. Martinez, whose 29 homers in less than three months with the team helped propel them to the postseason, has left in free agency, signing a $110 million contract with the Boston Red Sox.

"No, I don’t think it’s much of a question mark at all. Last year, minus J.D. we were pounding the ball all over the ballpark and we were one of the best teams in the National League, so we should have a very productive offensive year," said Lovullo.

Maybe, though, not as productive. That’s because of a new twist at Chase Field this year: a humidor.

Because Phoenix has the second highest altitude in the majors, the team has now begun putting its home baseballs in a humidor to counteract the effects of the thin air.

But so far, most players haven’t noticed the difference. Infielder Chris Owings and outfielder David Peralta said it’s much ado about nothing. 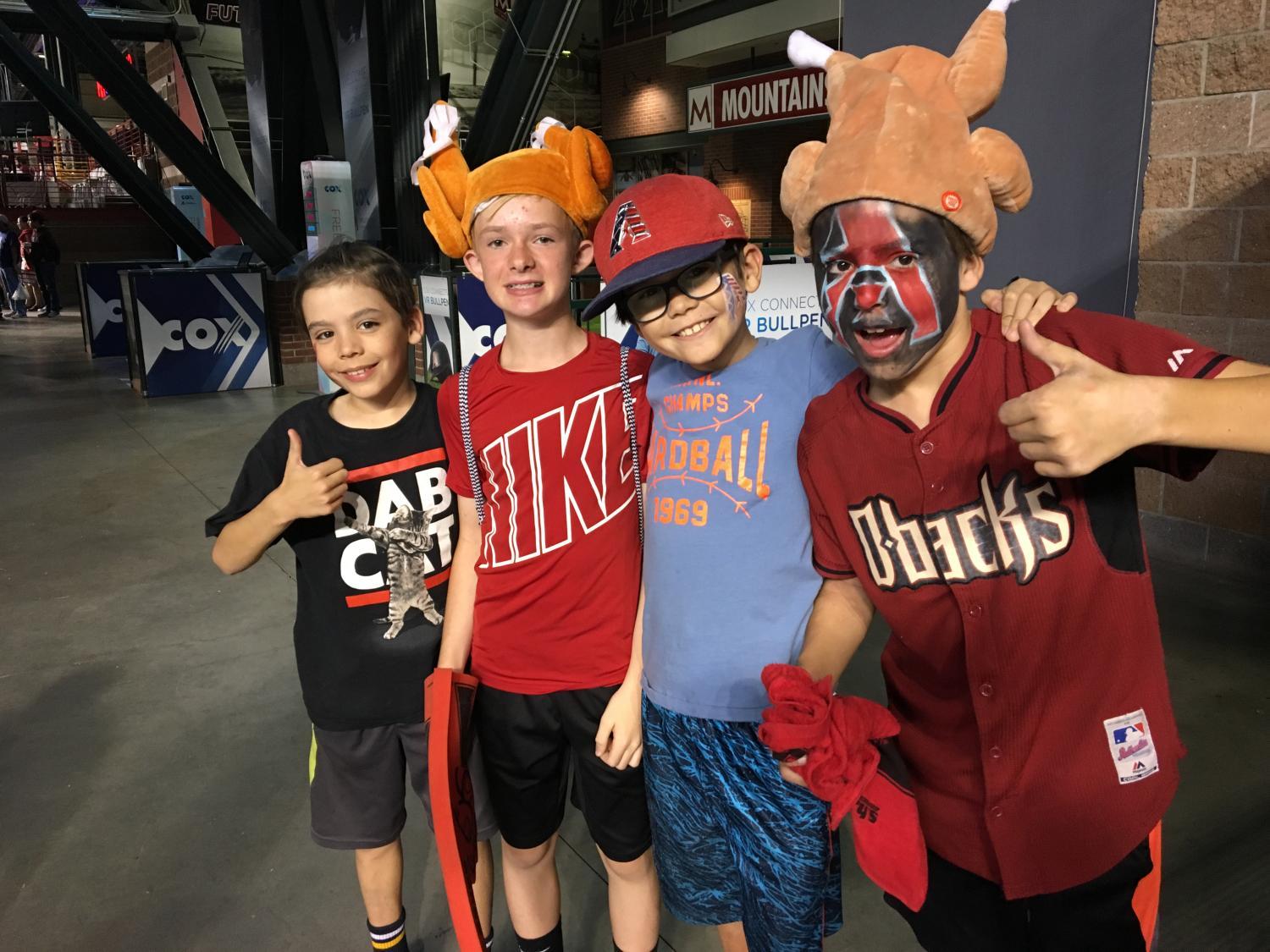 (Photo by Casey Kuhn - KJZZ)
Arizona Diamondbacks fan Alex Neis (second from right), 10, and his family and friends in 2017.

“You still have to hit the ball hard to get the ball out of the park. I don’t really know how that’s going to affect the pitchers, but I don’t really care about that," said Peralta. “You guys are making a big deal of it. It’s the same baseball, has the same amount of seams, so we’ll see how it is.”

And we’ll see how Lovullo’s Diamondbacks react after going from the hunters to the hunted in the toughest division in baseball, the National League West.

“We might be the hunted and we’re not going to sneak up on anyone anymore. I think that was pretty clear from the second half of the season on and we embrace that," said Lovullo.

As does the pitcher his teammates call “Hollywood” for his emphatic style, Archie Bradley.

“Last year was fun, sneaking up on people and gaining their respect. But you want to be the top dog. You want to be the person out there leading that everyone is chasing down and that’s where we want to get to," said Bradley.

And for that, only time will tell.

EDITOR'S NOTE: This story has been modified to correct the dollar amount of J.D. Martinez's contract with the Boston Red Sox.