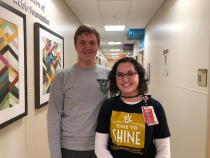 When a child is treated for cancer, and they’re finally declared cancer free, you’d think that would mean the end of their cancer journey. They’re now a “survivor” instead of a patient.

But, for most childhood cancer survivors, returning to school doesn’t mean the end of the road for them.

Among the estimated 600,000 childhood cancer survivors in the nation, two-thirds of them experience serious and even life-threatening secondary effects from toxic treatments like radiation and chemotherapy that they received as kids.

Collin Preszler was just 3 years old when he was diagnosed with acute lymphatic leukemia. He said he doesn’t remember a lot of the treatment process.

Sarah Okot, who’s 33 now, spent years in treatment at Phoenix Children’s Hospital when she was a child.