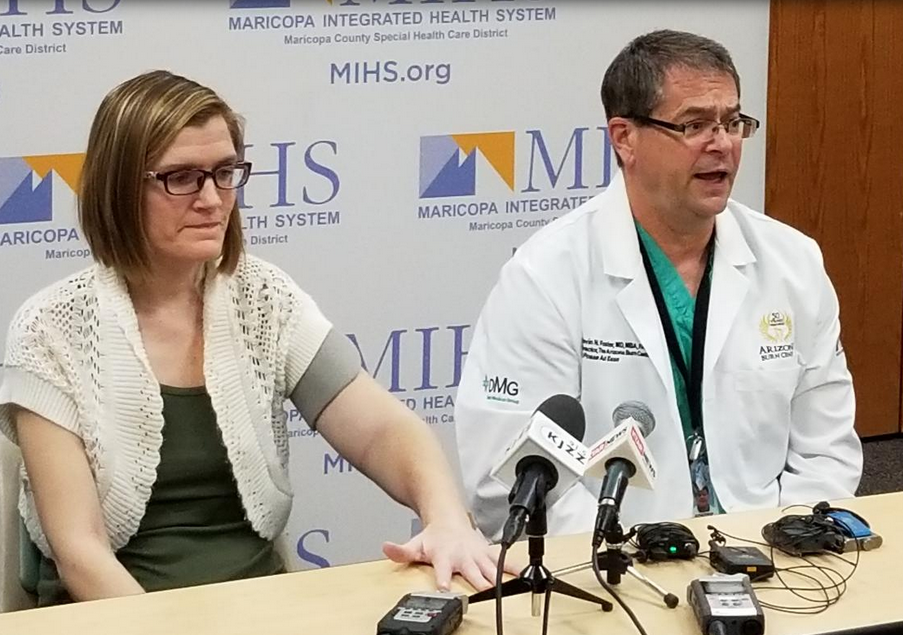 A special education teacher in the Peoria Unified School District has recovered from a flesh-eating bacterial infection thanks in part to an experimental treatment typically used to treat burn victims.

As a teacher during a major flu season, Christin Lipinski attributed her fever and soreness to the obvious — until she awoke from sedation a month later.

"Waking up and being told by my family that they almost lost me was very scary to hear, and then of course my husband had to come in and explain what had been going on."

Necrotizing fasciitis is a rare and serious bacterial skin infection caused by a handful of fairly common bacteria, including group A Streptococcus (group A strep), Escherichia coli (E. coli) and Staphylococcus aureus (staph). It can strike anyone, but is more likely to affect persons with suppressed immune systems.

The infection begins mildly, if painfully, but soon sweeps through the body's connective tissues and, without aggressive surgical tissue removal or amputation, can quickly kill.

ReCell is a device developed by AVITA Medical to aid in skin regeneration. Foster has been using the spray to treat burn patients as part of the U.S. Food and Drug Administration's evaluation of the product.

After seeking the FDA's permission, Foster applied ReCell to Lipinksi.

"We take a small piece of skin from the patient, and we put it in an enzyme, and it separates the cells into individual cells, and then we make a spray out of that, and we spray it over the wound."

Foster believes this is the first use of ReCell in treating necrotizing fasciitis.

Lipinski will return home soon. As to what she'll do first, she said her 9-year-old already has a list.